Yesterday was much longer than expected.

I ran into school to grab by report card assessments, thinking I would begin reviewing all of the assessments at the hospital. I also typed up my newsletter. Then I ran to robs office and off we went.

The cancer center was packed.

Think about that sentence for a second.

After three years, you pretty much know every nurse and receptionist, so I got a lot of hugs. I saw a woman I met two months ago who was anxious about starting chemo. We talked and I exchanged information, and have sent her tips along the way. I saw her yesterday and she looked great. She even went to Disney for three days. I should take my own advice. Ha!. They were backed up but got me right in to get my port accessed in the nick of time so I could run downstairs to present the check.

We went to the administration office and my doctor met me there. They said she has become the most requested doctor since my blog has come out. We took some pictures, and I handed over the checks. It’s actually more than $11,000 and still climbing. Dr Stopeck introduced me to one of her colleagues who she is conducting research with, and they are working hard on an immunotherapy for Er/Pr positive that may someday be for me. They were so thankful for everyone’s help.

We went into the exam room and discussed next steps. We didn’t get into MRI details. This is a huge change for me. I used to pore over the scan reports and stop breathing. I would check my patient portal relentlessly until the report would be uploaded. This time I decided to wait, and trust my belief over the paper that I am going to be fine. I’ll have to open it today though, as Donnie will want me to send it to him.

I’ve been keeping a secret, because I was scared if I said it that it would be true. I’ve been afraid I have been going into heart failure. My heart is always pounding, my chest

Is tight, and I get winded easily. Climbing stairs can wipe me out. I mentioned it to my

Doctor and she said it’s due to anemia. My

Red blood cells are very low. She said we will have to watch me and may have to take action. I’ll try to eat more iron rich foods and raise it on my own.

She said the scans couldn’t have been better, and I said they could have… the cancer could have been all gone.

We discussed the doxil and she is hopeful

It will work as well. It’s a longer circulating drug, which means it will stay in the body longer. When she said it will be once every four weeks I cried. Do you know what that means for me? I only have to go once a month to the hospital and be a cancer patient.

We went over side effects. She said to keep ice on my hands and feet and keep them

Cold. Stay away from heat and don’t take hot baths or showers, as it will affect my extremities. The good thing is I won’t need neulasta, and nausea shouldn’t be a problem. She also said my hair should start to grow back. We did a breast exam and the tumors there may be shrinking as well. She ordered me antibiotics for the cold and cough should I need it over the break.

She thanked us again for the donation. We had a nice moment where she explained why she became an oncologist, and it wasn’t because of the science, even though she is brilliant with it. She said it was because of the patients. They work with her and want to live so badly. They become a team.

And we are a team.

I told her that although she only sees rob and I every time, that she needs to know she is loved all over the north fork of Long Island and beyond by so many of our friends and family, and that this Thanksgiving we are thankful for her.

Then we went up to the infusion center for the chemo. It took a lot longer than we expected.

Mouth had a weird taste as well as my throat. Then my eyes started darting all over and I felt instantly woozy/out of it. I asked what is was and he said IV Benadryl. He said the reaction was normal and most people fall asleep in a few minutes. It got worse and worse as he pushed it in, and he said it may be decreased next time if they see there isn’t an allergic reaction to the doxil.

There is a page on Instagram called “The Cancer Patient” which has sick and twisted memes made by someone who has cancer. It’s hysterical, and there have always been memes about Benadryl which I never understood. 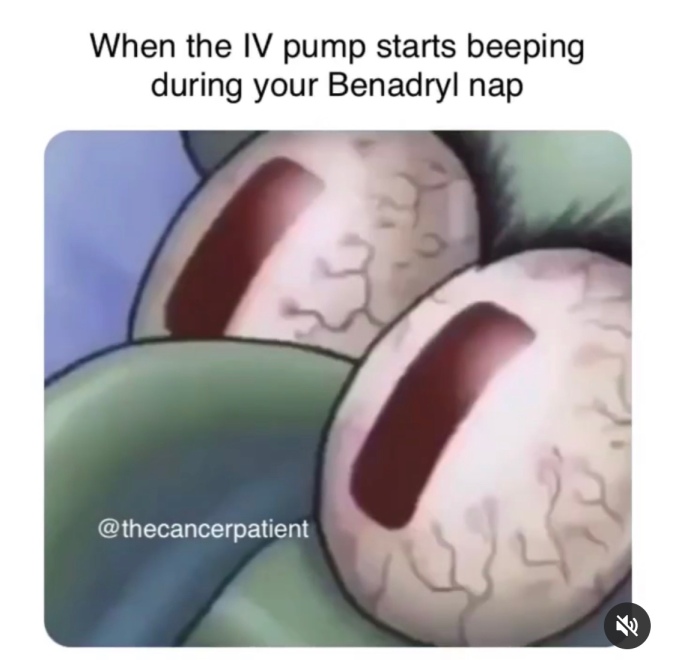 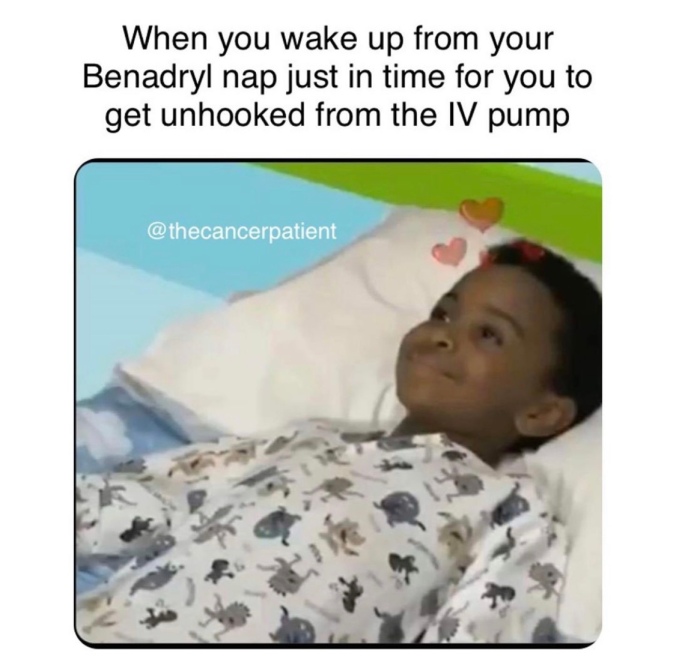 So much for report cards while I got chemo.

The doxil is a sister drug of adriomycin and red, except it gets hung in an IV bag instead of pushed directly in by syringes. It was supposed to be an hour infusion but orders were changed to an hour and a half.

The nurse kept coming in to check on me and was shocked I was still awake. He said everyone falls asleep after the Benadryl. Apparently I would need the horse size dose to sleep through it.

We finished at three, and I ran to see a dear friend quick who was in the hospital. If you think I’m a miracle… you should meet her.

When I was first diagnosed she gave me a little gift that said “expect miracles”, and I have ever since. 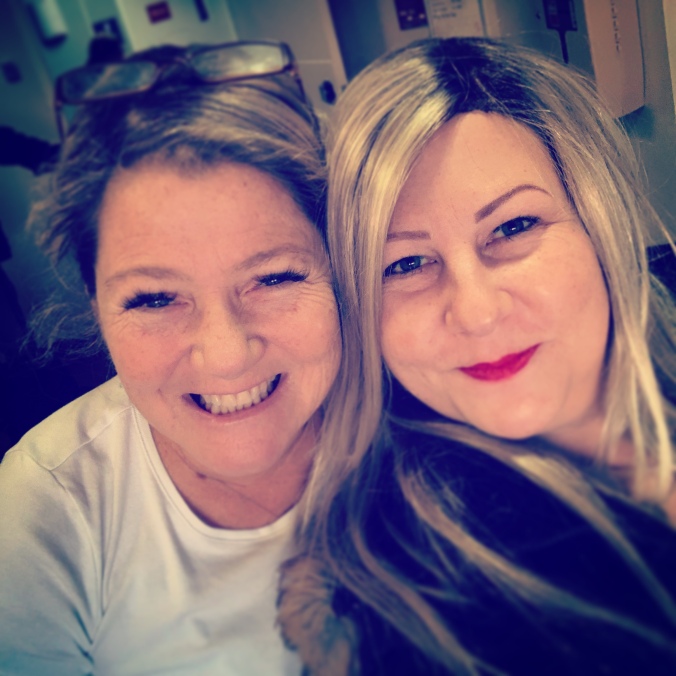 I then went to cranio sacral therapy, and it was amazing. I had to ask for the heated table to be shut off which made me sad as it is my favorite thing. For the next hour my head was worked on and I felt like I was in a twilight zone, floating through space. It was almost a dream state, and as I was floating in the blackness I head a voice tell me to talk to my seven year old self and tell her the secrets of this life.

And then I saw myself, at seven.

When we were done, I didn’t remember what i told the seven year old Keri, and didn’t know if that was God, the therapy or the Benadryl. 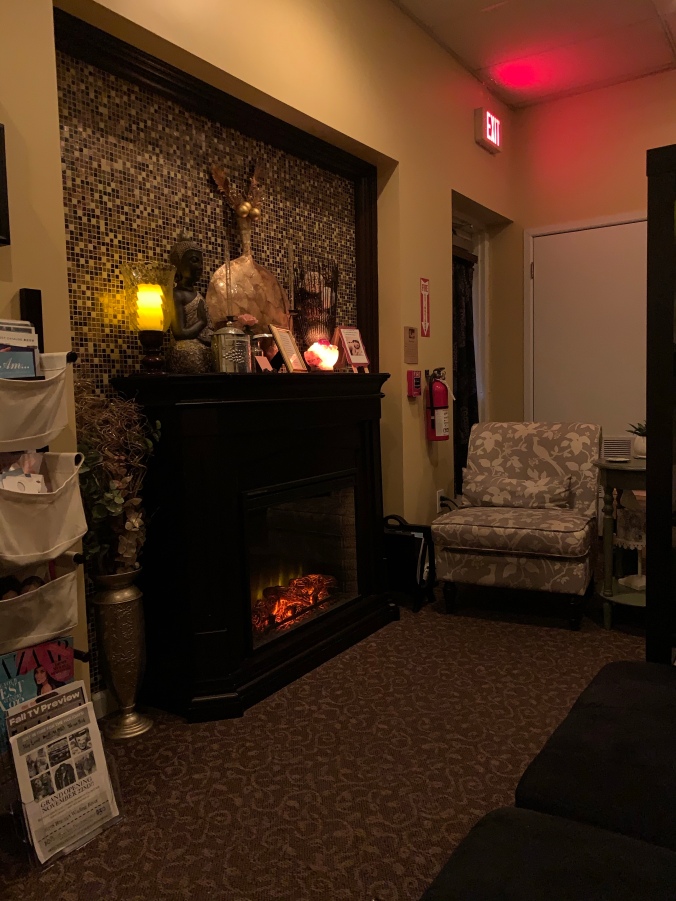 Then I pulled out all of my kindergarten assessments and poured over every test and writing piece and wrote my notes.

At ten o’clock I went to bed…

And was up and wired.

I listened to several guided meditations and finally fell asleep around twelve with my heart pounding.

Thank God we have off tomorrow.

I usually host thanksgiving, but my sister weeks ago said she would do it and take care of my family so we could rest. Yesterday we finalized plans with robs family and his parents will bring donuts and bagels for breakfast so now we know our day. I spoke to my sister and we will go to her house at 4 and be surrounded by love. Quinn keeps saying how excited he is to be with Aunt Jill and the sprites because they have cared for him so much during the cancer and make special memories with him. Just spending time with him means so much, and he is old enough to appreciate people who show over and over they care.

Thank God for my family. They have taken care of me and rob and our kids every step of the way.

Today is pajama day, and I’m treating the class to a movie and I’m picking up munchkins to surprise them. We’ve all worked hard the first trimester and deserve a treat.

Then I’m meeting my sister and my sprites to see frozen tonight at 6:45 to kick off the holiday break, then it’s rest, rest, rest.

I’m hoping to finish report cards before thanksgiving so I have one more thing to be thankful for.

I said it was a long day.

May today be calm, fruitful, productive and healing.

8 thoughts on “Doxil Round #1 and my Ed McMahon Moment”