There are no words for last night. 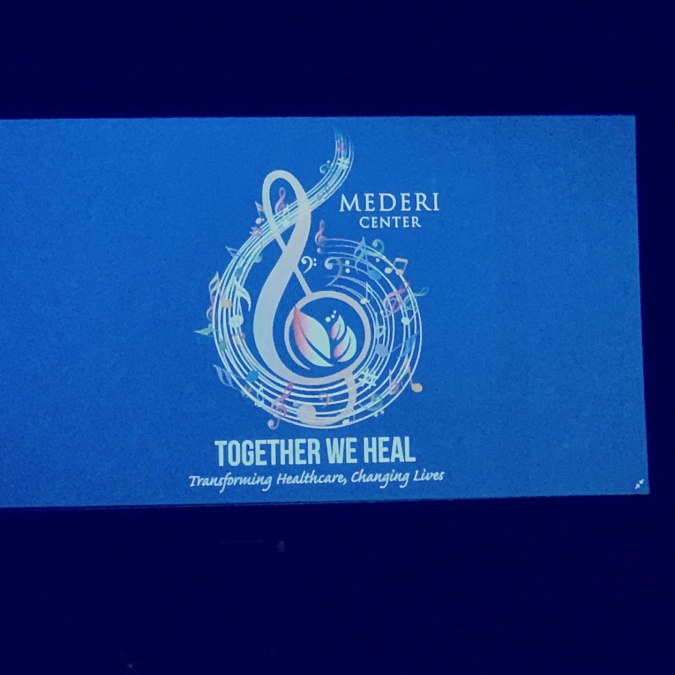 I taught in the morning, then ran to Quinn’s school to meet him for lunch. He beamed from ear to ear the whole time. He ate lunch, showed me his computer spot, gave me a tour of the library, then we went into the “maker space” his librarian created, where it’s full of all different craft materials and items to make whatever you want. It was the best half hour all week.

Then rob and I caught the ferry to Connecticut and checked into the hotel. It’s a beautiful hotel, and I was able to rest for an hour before leaving for the event and to meet Donnie Yance. I packed three wigs and ended up wearing the brown one. I had a small pity party of knowing everyone would know I was wearing a wig, as they would see the movie with me and short blond hair, then there I would be, in long brown hair.

But I would be there, which is the main thing.

We walked in to the venue and there he was.

The man who has been helping me to thrive through cancer.

He didn’t recognize me, but when I said my name, his face lit up and we hugged.

Then he hugged rob.

That’s how you know he is special….

Rob doesn’t give out hugs to just anyone.

Immediately the brilliant mind of Donnie came out and he discussed my latest scan and next plan of treatment without skipping a beat. He is excited for me to stop the Adriomycin and cytoxin and switch to doxil. He gave a lot of credit to Dr Stopeck, saying not many oncologists would do what she is doing. He said that doxil will be less toxic and is similar to adriomycin, but where adriomycin really attacks the whole body along with the cancer, doxil will be more targeted to the cancer and easier on my body. He mentioned a specific blood test to check on heart function, as all of these medicine damage the heart, but he said that his clients don’t have those issues.

The man is a genius.

We then met his wife, Jennifer, who helps run Mederi. I hugged her and cried again. These people are just the most loving people you can ever meet. Some of the staff flew in, and jennifer brought them over to me. They said they all sat together last week and watched the movie. They all loved it. I gave everyone hugs to bring back to Erin, who is my contact person. She is my North Star at Mederi, and keeps guiding me back to Hope whenever I need it.

As rob and I sat there, an older gentlemen came over and said Jennifer asked him to come see me. He put the sign of the cross on my forehead, and said he will be praying for me.

As we spoke further, rob and I realized something.

One or two phone conferences ago, Donnie mentioned he has been helping a man in Canada who has been living with stage four cancer for over twenty five years. Donnie said he has never been able to get him to NED, (no evidence of disease), but he has been thriving and living with the cancer the whole time, and is the priest of one of the largest churches in Canada.

There have been many nights where I’ve been crying and scared and rob would say, “Keri, remember the priest in Canada… 25 years!”

I met the priest.

It’s another thing to meet him and have him put the sign of the cross on your head.

We laughed about the taste of the special smoothie Donnie has in the protocol, the amount of pills, and how brilliant he is. The priest said that Donnie isn’t God, but has been blessed by God and given this gift, this passion to heal people.

The event began and Jennifer kicked off the night. She is just amazing and the work she and Donnie and the staff do is life changing.

The opening act was a comedian who made us laugh. Jeffery Gurian . He was the emcee of the night and has worked with some of the greatest minds in the comedic world.

The next act was Donnie, who is a talented musician. He is a composer and plays the bass guitar. He came out on stage and blew rob and I away. Just when we thought he couldn’t get any cooler.

Then it was time for the movie debut at the benefit. It was surreal having myself up on their big screens telling my story. When the lights came up, jennifer took my hand and she and Donnie brought rob and I up on stage. I thanked everyone there for their support and thanked Donnie and the Mederi center . I told them all that in just the past two hours I had another person sent to me and had also sent information along to an old friend. I said God didn’t give me the cancer, but He put people in my life to help me live with it and thrive through it.

The movie has been uploaded to YouTube and has already been viewed over two thousand times. My hope is that by telling my story, others realize their story doesn’t have to be what a doctor tells them it will be, or end in a certain time frame.

(Here is the link, you can go to YouTube, type in “Mederi center” and look for the “Thats Not Your Story” video.)

The rest of the night I had people coming up to me who are also Mederi clients and told me they are on similar protocols and thriving.

I was with my people.

It takes a huge leap of faith to take this route.

Some people only do traditional medicine.

Some only do alternative.

I’m doing both, and everyone should do what their gut tells them.

But to me, this makes the most sense. Do everything I can to support my body as it takes the medicine that attacks the cancer.

The proof is in the patient, and here I am, three years after being told I only had weeks or months, maybe a year or two.

Being around others who are doing the same thing validated every decision rob and I have made.

I’ve felt all alone in this journey a lot, and it’s been surreal, being told I’m a miracle…

Last night I was surrounded by unicorns.

I texted Kym, who was in the movie with me, and she had a friend at the event who came and introduced herself to me. She also uses Donnie and we sent Kym a selfie.

I also texted Jared, the filmaker. I thanked him for telling my story in such a beautiful way. In two short days he captured the essence of my family and my life. We all miss him and hope to someday have him do the sequel…

The concert continued with Roberta gambarini, and her voice was like silk. She was amazing.

The main act came on stage and Gino Vannelli puts on a great show. It was an intimate concert and he told us some beautiful stories. He sounds just like he does on the radio. 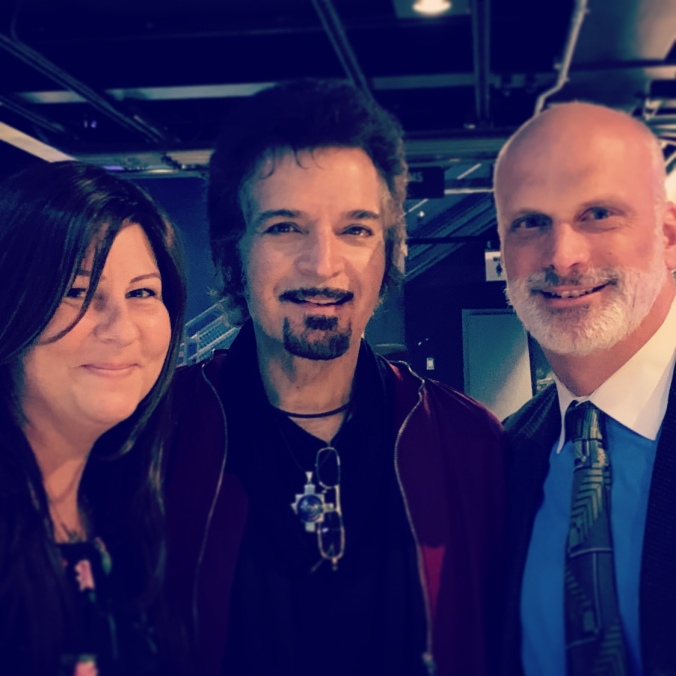 It was a great night, and as we left, Donnie spoke to us again about the upcoming treatment.

I ended my week full of hope.

It was a long week, and I was exhausted headed into the night.

The liver MRI, getting the results that the tumors are shrinking, being anxious about the new chemo, recovering from the last heavy dose last week, dealing with a cold and cough, cooking with kindergarten and the big feast, late night rehearsals and driving back and forth with Maddie, finishing assessments so I can start report cards this week, and then traveling last night for the gala/benefit.

Madison had her opening night and my parents said she did great. I cannot wait to see her tonight. I saw some videos and still cannot believe my girl tried out for “A Chorus Line” and got a part, sang, danced, and wore glittery clothes. She continually surprises me. 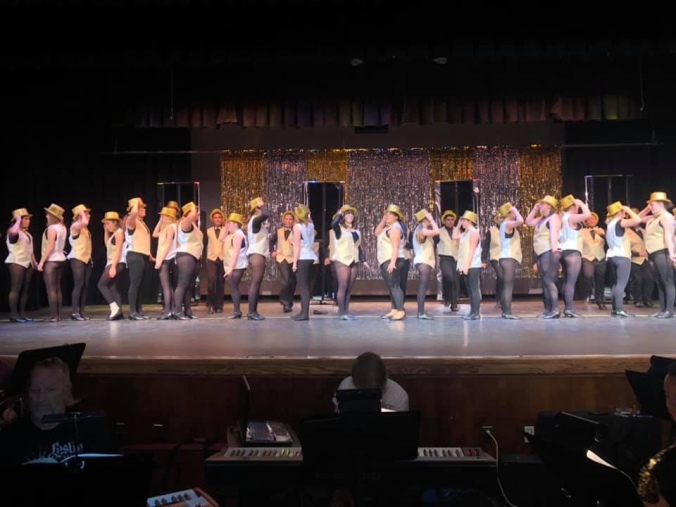 The girls got their report cards and blew us away. I’m not the only one thriving in the Riverhead Central School District. We are so proud of our kids.

Today we are hoping to have breakfast with one of Rob’s best friends and his wife who live nearby, then head home. I’ll rest all day and then go see the show.

I’ll fill up my pill bags for next week, think about the priest from Canada, and give thanks to God for all of the people He has brought into my life.

May today be a restful and healing day.

2 thoughts on “Mederi, The Movie, The Benefit… and Unicorns”