I had the BEST birthday yesterday.

For soooooo many reasons.

Reason #1- I was alive. Today is the three year anniversary of the phone call I got when I dropped off my kinders to art, and the words, “You have cancer”. Three years of continuous chemo, doctors appointments, spine biopsy, breast biopsy, liver biopsy, port surgery, appendix removal, injections. BUT…

I’m still here. Here’s to 47 years of thriving. May the 48th year of life be healing.

Reason #2-I cried on and off all the way in to the stadium. My mouth hurt, my hands and feet hurt and are cracked, and I’m exhausted. I was embarrassed I would see people I havent seen in years and didn’t have eyebrows or full eyelashes or hair and was bloated and tired. BUT…

Rob said they didn’t care, they just wanted to see me. And it was true.

Reason #3- the kindness of Trish and Gerry. Trish was my sorority sister in cortland and we’ve reconnected. She married Gerry, a guy I knew from waaaaay back when, who was then a teacher in my district, then went to administration and is now a superintendent in shoreham. I love them. Trish decided to buy a block of tickets last year for the cortaca game, because she had total faith I would be here, and she wanted me to be surrounded by sisters and love on my birthday. She and Gerry also gifted me a hotel room so I could rest and sleep if needed. Then?

The shoreham girls soccer team made states.. and played in Cortland yesterday. Oh, the irony. All of cortland was in MetLife and the whole day Trish planned for me? She was in cortland. Shoreham parents? You have a gem of a superintendent, and his wife is a light in my life. (Shoreham girls won… so I cant be too mad! Go girls!)

Reason #4- my friend beth flew in from Illinois to be at the game. I was diagnosed with cancer, then one year later? Beth was diagnosed as well. She is now two years out from her treatments and seeing her made my heart so happy. We hugged for about a minute. Our hearts had to beat next to each other to say,”You made it…

Keep going.” I had a core group of girls in college…Steph, Sharon, Sarah, Beth. The five of us stayed together and always made sure to see each other through the years. It’s been seven years since we last saw each other. That’s the thing when you have kids. You get sucked into the mom life and forget who you are other than mom. As they get older, you find yourself again. Yesterday we found ourselves and remembered who we are.

Reason #5- cell phones. No one had plans for a meeting spot. How would we all find each other? Our cells were our beacons, and parking lot numbers and letters were flying all day. Cell phones were whipped out for pictures. I have so many pictures and they will make me smile for years to come!

Reason #6- Phi Sigma Sigma. I was part of a group of girls who started a sorority in Cortland. We didn’t want hazing. So we founded a national sorority and had over ninety girls begin this journey. Because of that, we had years of laughter and tears, connections, sisterhood. The sorority continued for years after we left. It wasn’t easy to start a sorority and we had tests and paperwork and meetings. But because we did, so many other women were able to meet and become family. Yesterday? I met women who became sisters years after I left, and they are

Awesome. They are exactly who we envisioned our sorority to be represented by. I was the pledge mom of the Gamma class, 27 girls who I ushered in to the sisterhood.

Yesterday I saw founders, my little, others in my family line… girls I’ve only communicated with on Facebook in our group.

And I love them all.

I love you so, phi sigma sigma 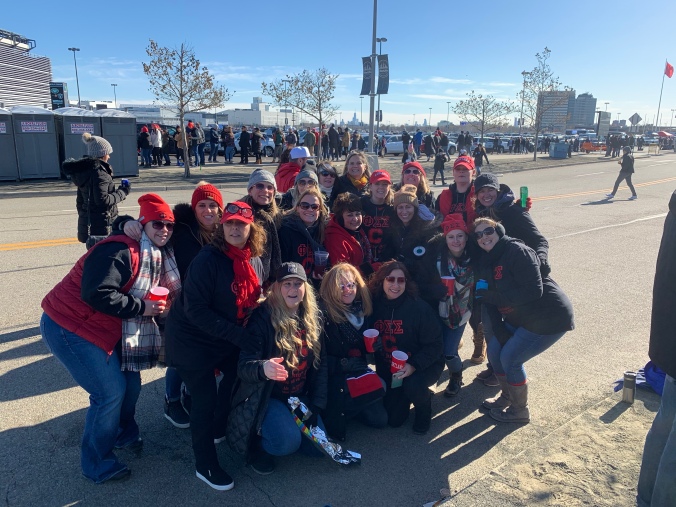 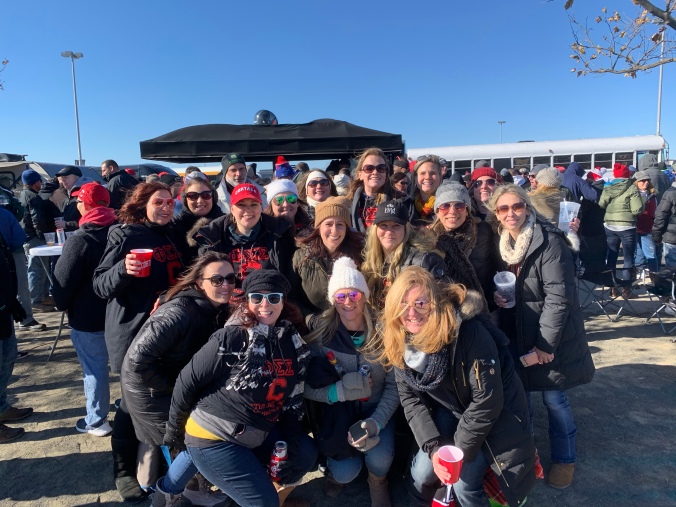 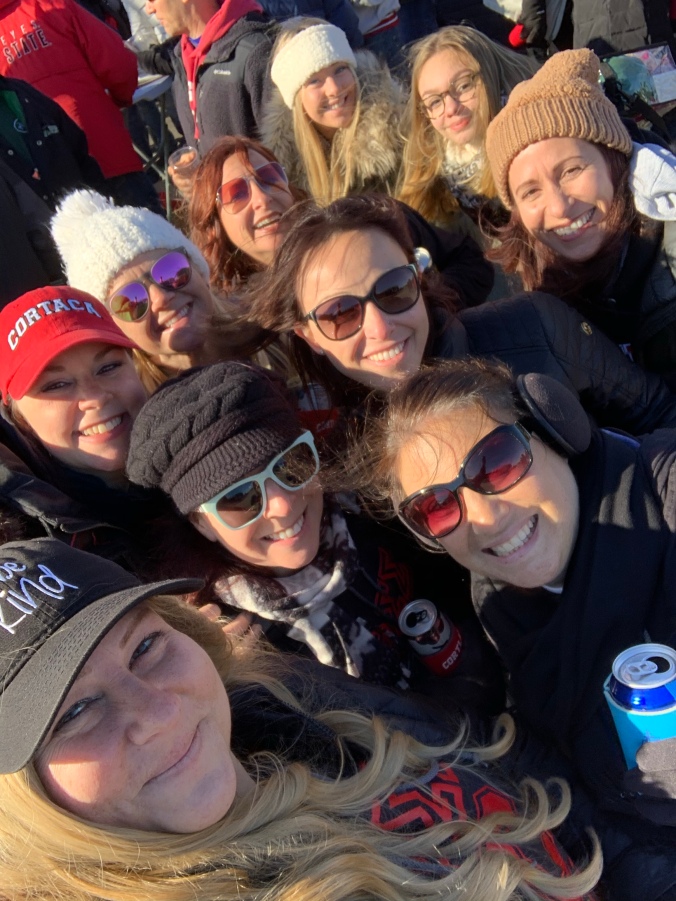 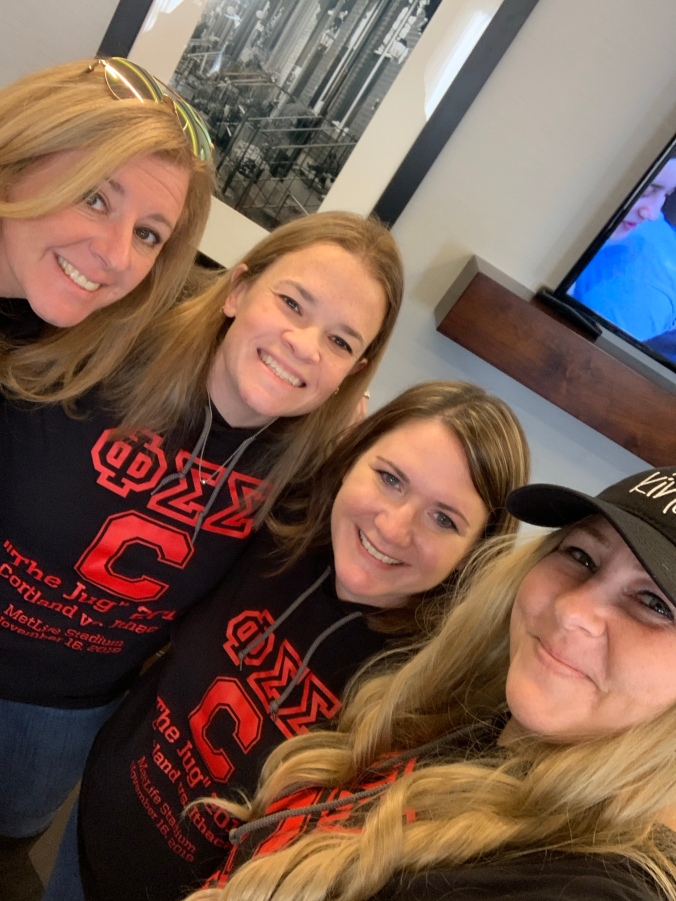 Reason #7-Pi Kappa Phi was one of many fraternities we had socials with. These guys were my guys. I even won the Queen of the Roses on my birthday one year at a fundraiser they had. They were the gentlemen, and the fun ones. I loved all of them. Yesterday they had an area for tailgating and we found them. It was like a mixer from the early nineties. I cried and hugged them all, and laughed and just loved them. Poor rob was the only husband who came in my group. But these guys? They all talked to him. I love my Pi Kaps. 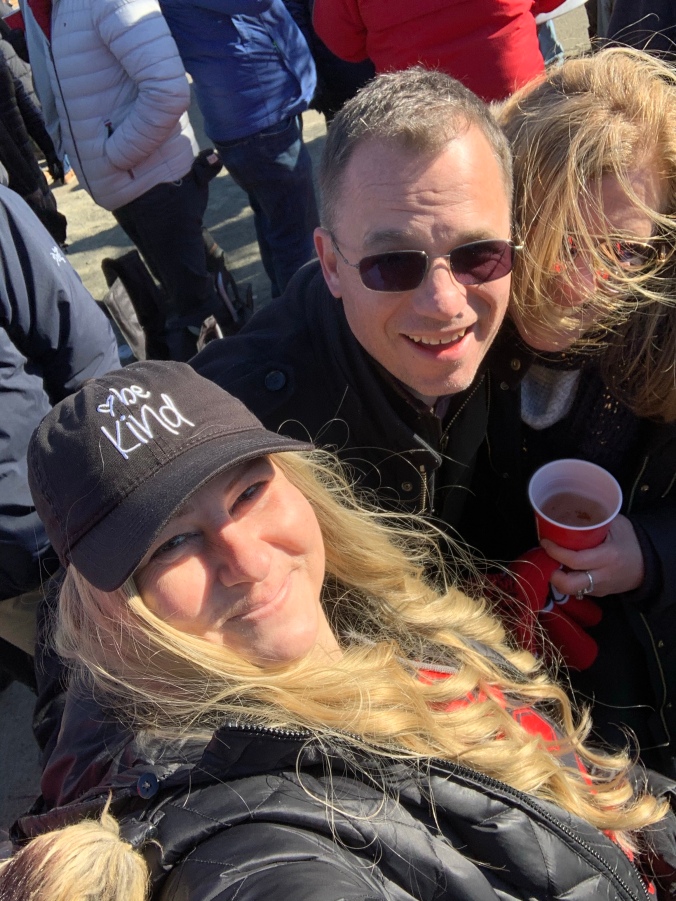 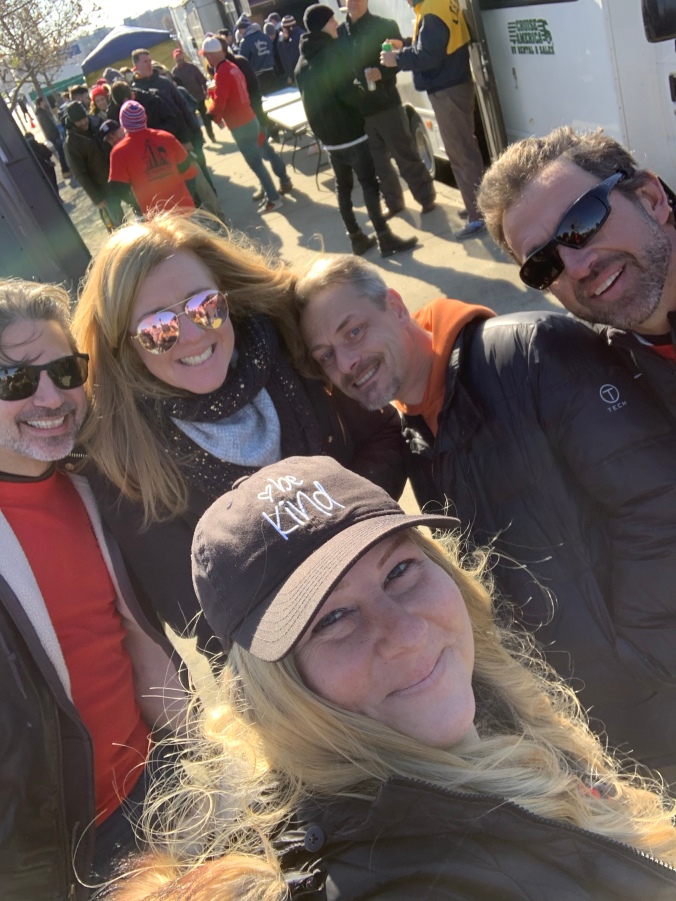 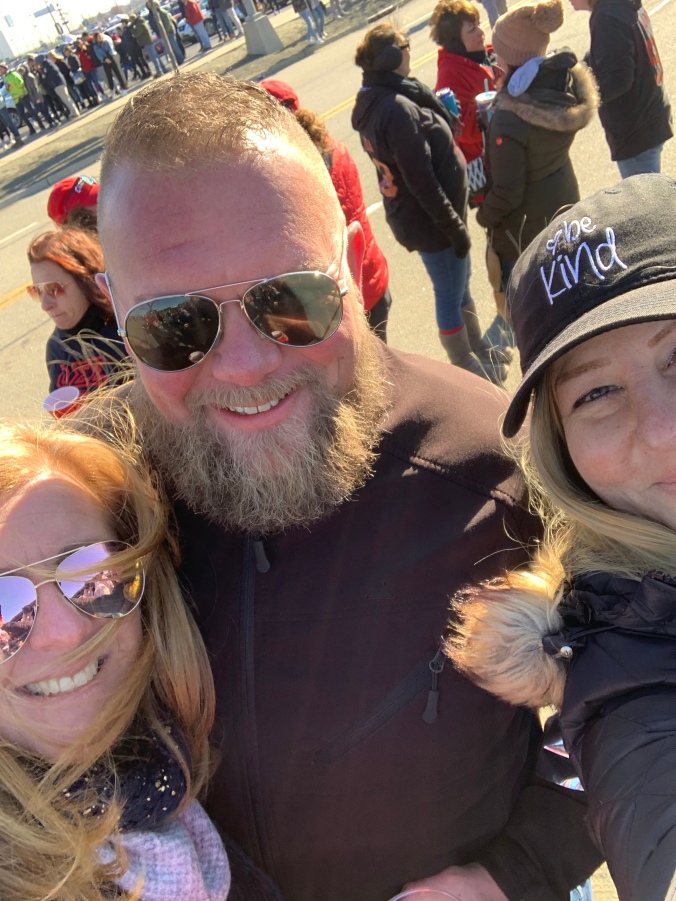 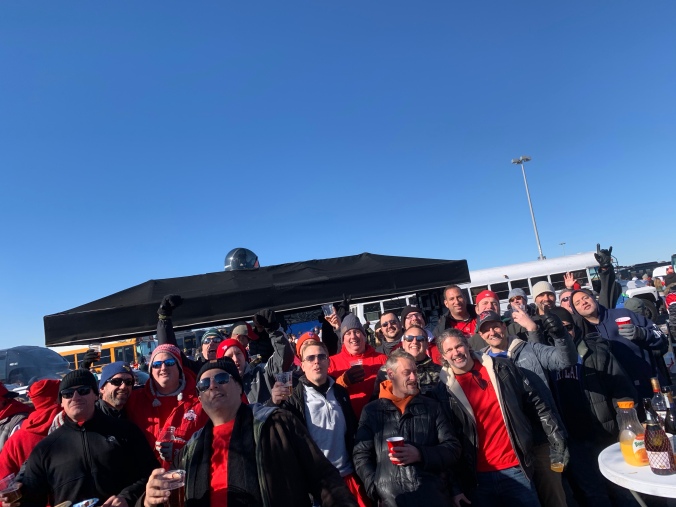 Reason #8- Shea Hall was represented. I looked up near the end and my friend Caroline, who I havent seen in 26 years was standing over me. She recognized rob, and came over. Apparently others were there too, and I missed them, but man… it was so good to see her.

Reason #9- I got to see my friend Brett who is an amazing man and a colonel in the army. I’ve prayed for his safety and seeing him made me so proud!! Through him I reconnected with another old RA from Shea yesterday. Connections… 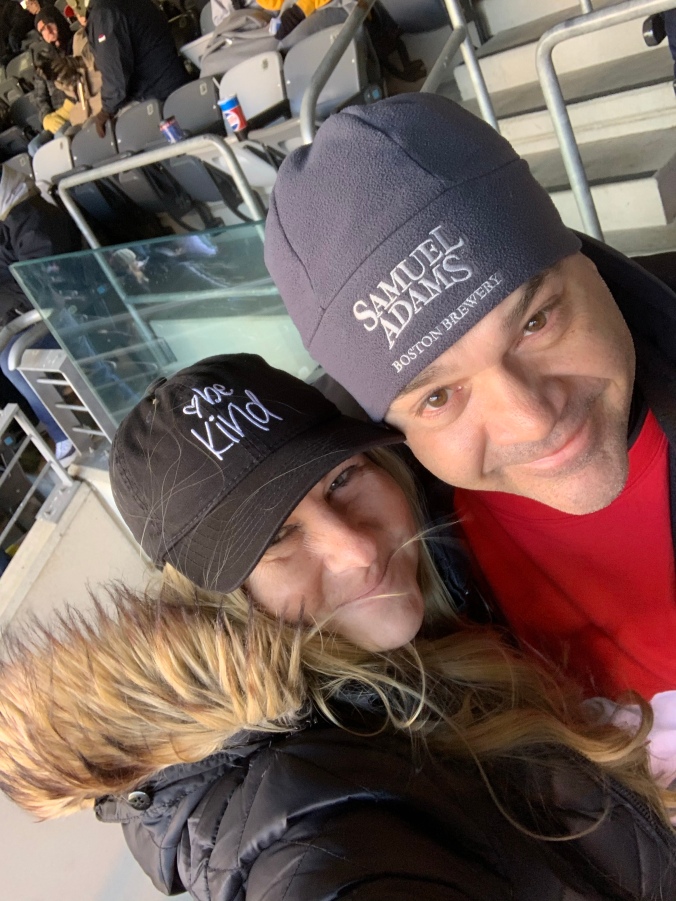 Reason #10- Rob. For so many reasons. He doesn’t like social media. Stays away from it. Yesterday? He was one of the most recognized people ever. People told him how much they love him because of how much he loves me. One sister said rob is her best friend but doesn’t know it. People may not have been able to recognize me, but they saw rob and knew then that I would be nearby. He got so many hugs from my sisters. He met my pi kaps. He heard stories about me and learned about the “Keri before rob.” I always told him I was a good girl all through college and yesterday he heard it. My friend kittles said I told the dirtiest jokes but was the most innocent girl, and we laughed and laughed. He watched over me all day and made sure i was ok. Best…husband…ever.

Reason #11- my parents and kids had a great day together. Maddie got her SAT score and blew us away again. Thank you, Riverhead!! They all called me in the morning and I ended my night on the phone with them. I am blessed.

Reason #12- ALL OF YOU!!! My phone was full of texts, posts, comments, messages of love. It was overwhelming. People from my childhood, valley stream, cortland, riverhead. If love alone could cure cancer, it would all have been gone yesterday for sure. I love each and every one of you.

Reason #13- I’ve been told it’s official. I’m receiving the very first ever advocacy award at the north fork breast health coalition gala. Save the date. It’s the award I never ever would have wanted, but am honored to receive. Quinn said the other day in the car that he feels God is using me to help people, and he wishes I never got the cancer but is glad God is using me to help people with cancer. I hope it’s true. So save the date, and come celebrate with me. I’ll be there.

Today we will get up, eat and then travel home. I’ll celebrate my birthday with my family. I’ll give thanks for all of the people in this world who spread love and light and joy. And I’ll remember all of the hugs and love I got yesterday.

It will carry me through this week.

Thank you for this life, my friends, my job, my district, my town, my college, my cancer team, my family.

May I continue to thrive for years and years to come! 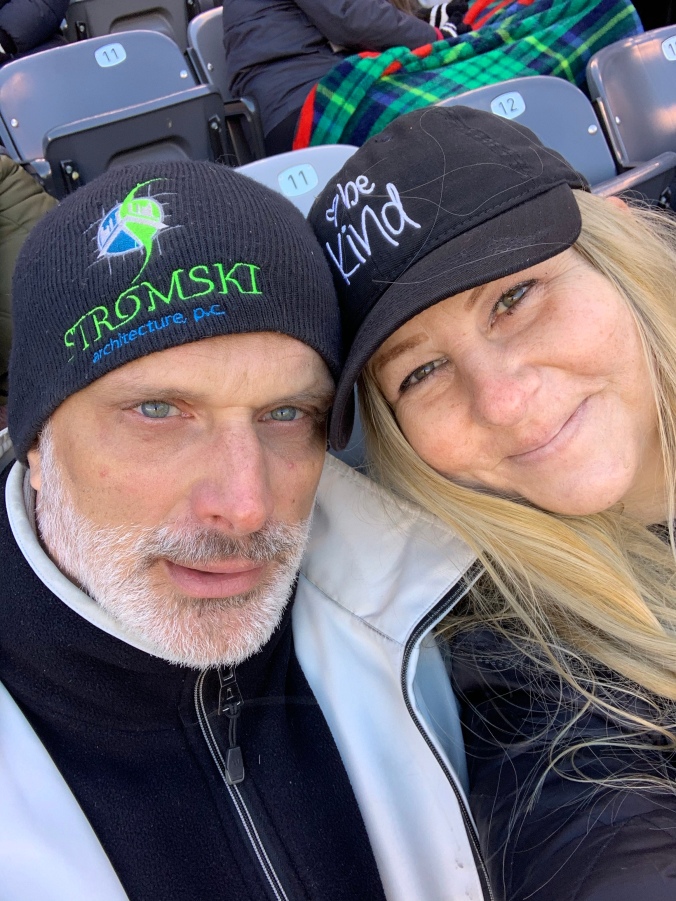