I’m up and in the detox bath… and just saw the text from my sister Jill that last night we raised a little over $5,000 for Dr Stopeck.

I also just got an email from my oncologist that we are headed in the right direction and “more Chinese soup on the way!”

It’s a good way to start the day.

Yesterday I got the cancer center and waiting for me at the front desk was a bag. The two women who check everyone in said someone left it for me and doesn’t want me to know who left it. It’s full of cards for me to open every day, a bracelet, an angel ornament and some other goodies.

Man, after all of the anger that’s been bubbling over from people, it was so nice to get that. I’m taking a break from school and town postings. I spent a week defending my school district, eyelashes, people trying to do their job with their hands tied behind their back, and realized people who don’t want to listen won’t. You can’t change people who love to “stir the pot.” I’ll focus on those who buy the ingredients and serve the soup.

I went up to the infusion center and my nurse Jean got me right into a chair to access my Port. It only took a little heavy breathing and the blood started to flow. She gave me a bracelet and I gave her one of the “Team Stopeck” shirts I had made. They were a big hit, and I wished I made more.

We went downstairs with my port tube sticking out of my chest. It’s so surreal every time to look at it. But “Portia” is making things so much easier. We went in and Dr Stopeck and her staff loved the shirts. She even asked to take pictures. I think her favorite hashtag on the back was “Researchisthereason”. And it’s true.

Without research, I would not have had these drugs to help prolong my life. Without Donnie Yance and the Mederi Center, I would not have the supplements and nutrition to back up the synergistic healing effects that keep me strong. Without research I wouldn’t have my chinese herbalist and his immense knowledge of herbs to help fight the cancer and keep me strong. Research matters. Which is why I’ve been such a supporter of Metavivor which gives 100% to stage four research, as well as an advocate of raising awareness against the Susan g Komen company as well as the other “Pinkwashing” groups that give only a fraction to research .

The appointment went really well, she had a hard time finding the lymph node, the breast tumors felt a teeny bit smaller, and my liver function is that of a perfectly normal human. It’s actually probably better than most people.

I won’t see my doctor for another month, as she will be in Korea addressing the South Korean Oncology association. Yup… she is that badass. My next appointment will also be in the main hospital in the new wing, and everyone is a little anxious about how the big move over will be. I’m sure there will be kinks, but to me, stony brook isn’t about the building I’m in, it’s about the people who work there and the hope I get.

I went back upstairs and we did the long process of pushing fluids, anti nausea meds, some steroids, then the slow push of the adriomycin followed by Cytoxin. 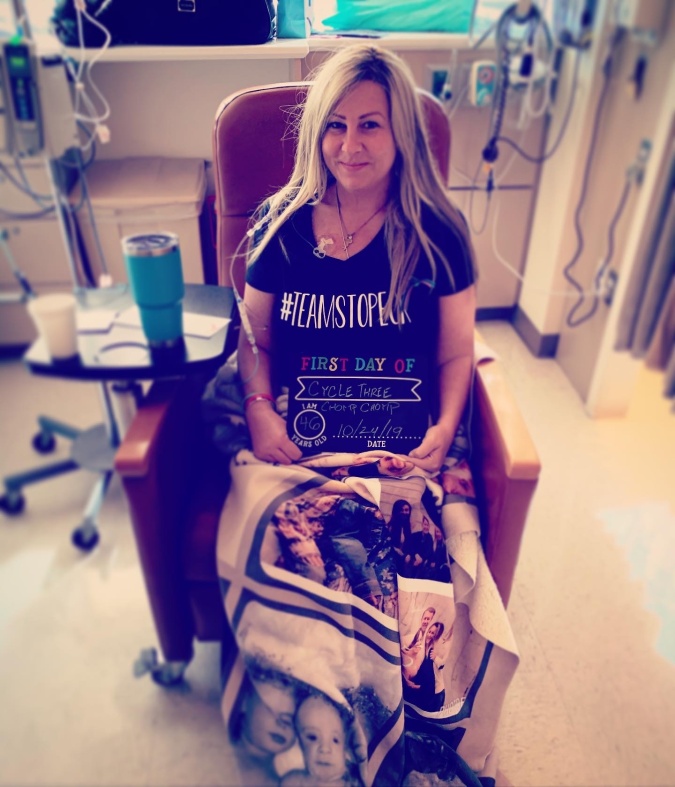 I got some soup they handed out and kept up with my fast. I’m so hungry. I did cheat a little and had three crackers and four soup crackers to help with nausea when it hit. I also took a teeny bite of the famous nick Coutts meatball. I’ll go back to eating tomorrow. I got a message from my Fairy godfather, Rick Shapiro, reminding me to stay strong and keep doing all the healthy things. Listen, if a man who wrote the book, “Hope Never Dies” and interviewed the top or the top in healers, as well as miracle stories, tells you to fast for three or four days during chemo…

You suck it up and fast.

The best part was when Maureen, Dr Stopeck’s assistant came up to the infusion floor to tell me the results of the tumor Markers. Jean closed the curtain and walked out because she said she was going to cry. Maureen handed me the paper and I looked. At first it took a minute, because the numbers are still high, but then rob went into his briefcase and took out the labs from two weeks ago to compare.

We are moving in the right direction.

I’ll get one more dose November 7th, then get an MRI of the liver to check the size. We are thinking of the next step, as I cant stay on this chemo because of the damage it causes To the heart. So maybe doxil or some other treatment. We will see.

We finished up and came home at 3:30 and slept.

Then off to the spaghetti dinner we went.

First, I had no idea what Jeni’s Main Street bistro was. You should all follow her on Facebook.

Her pictures of her food and her menu is amazing. Add the fact that she does entire fundraisers for locals in need? That’s the business to go to. Forget going to the big box restaurant chains… eat local.

I met Jennifer, the owner, and Chris Meyer, who actually came up with the idea and contacted my sister. It’s amazing how supportive strangers can be. Between the three of them, and then my two friends Trish Poole and Lorraine Warren who gathered items for a chines auction, we raised a little over $5,000. I had told my doctor yesterday my goal was $1,000 and she was thrilled. Wait until I email her today!!! My goal was to hand her a check between $3,000 and $5,000. We blew that away in three weeks. 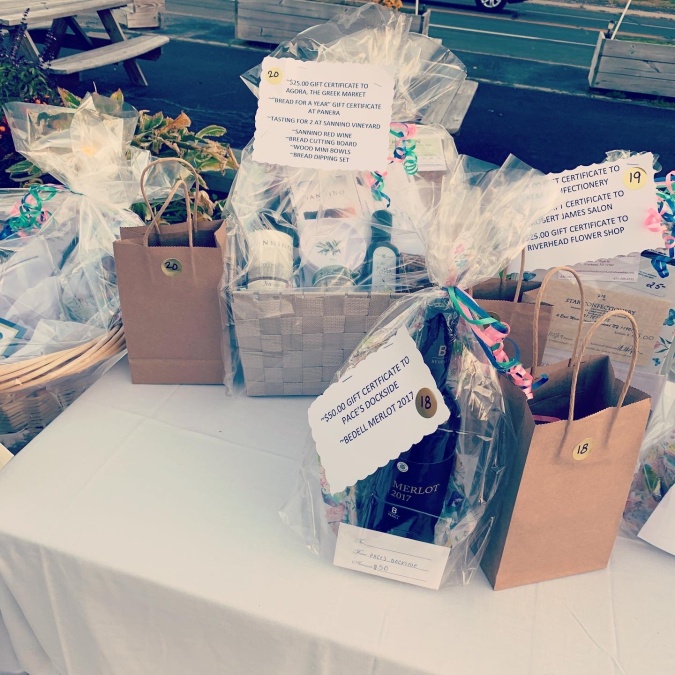 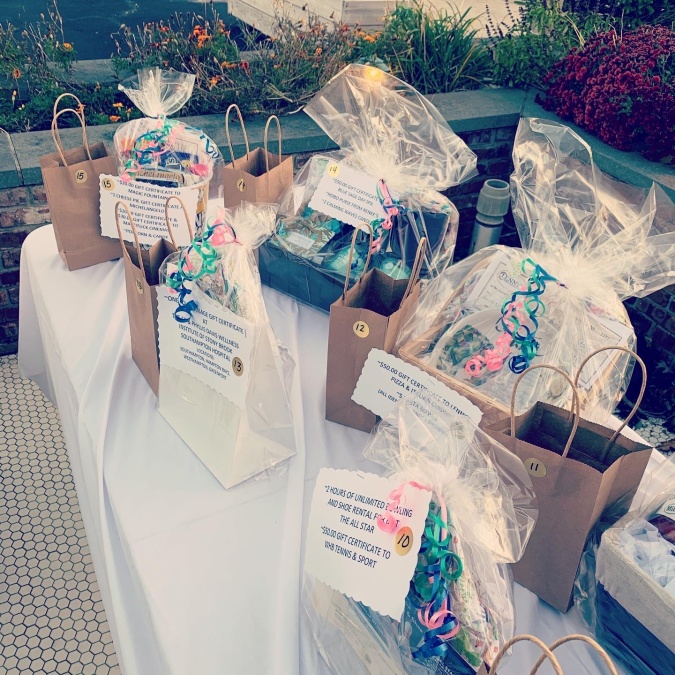 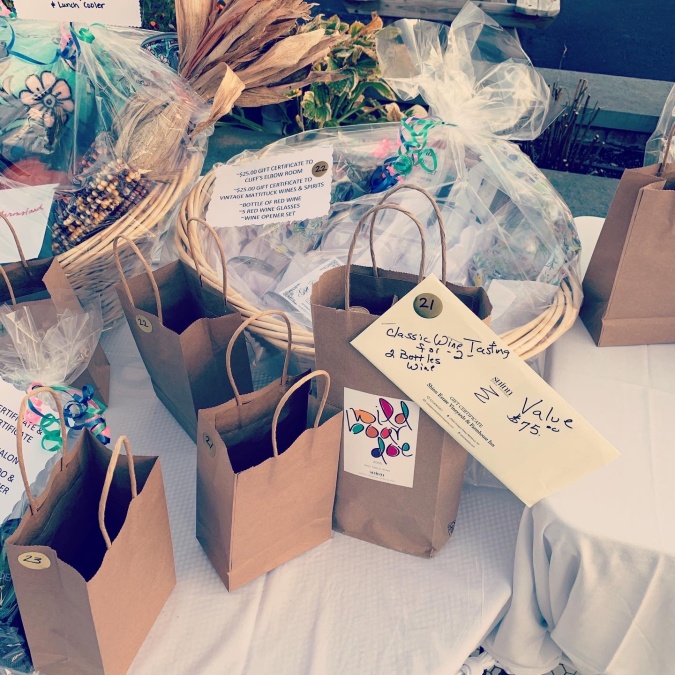 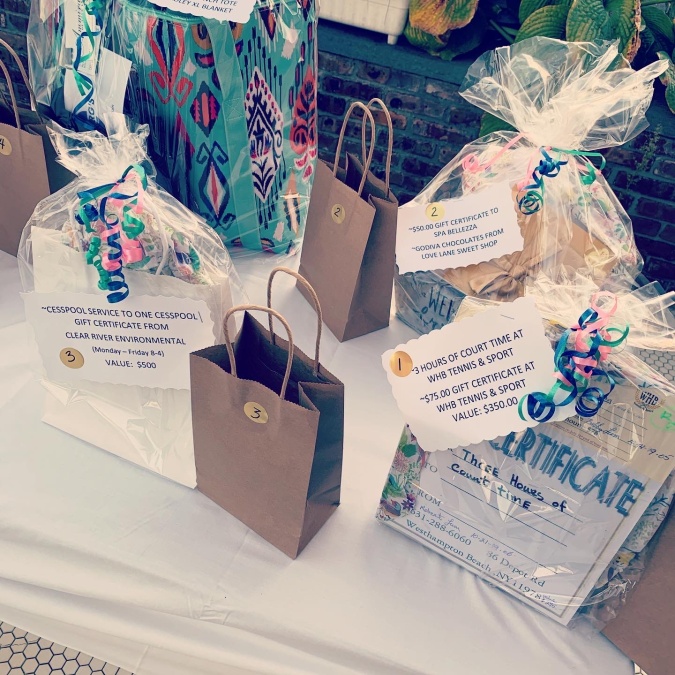 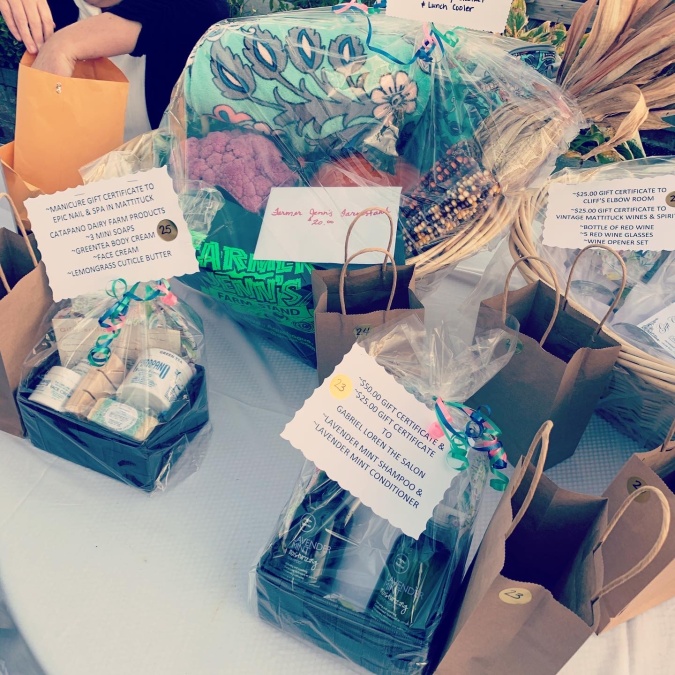 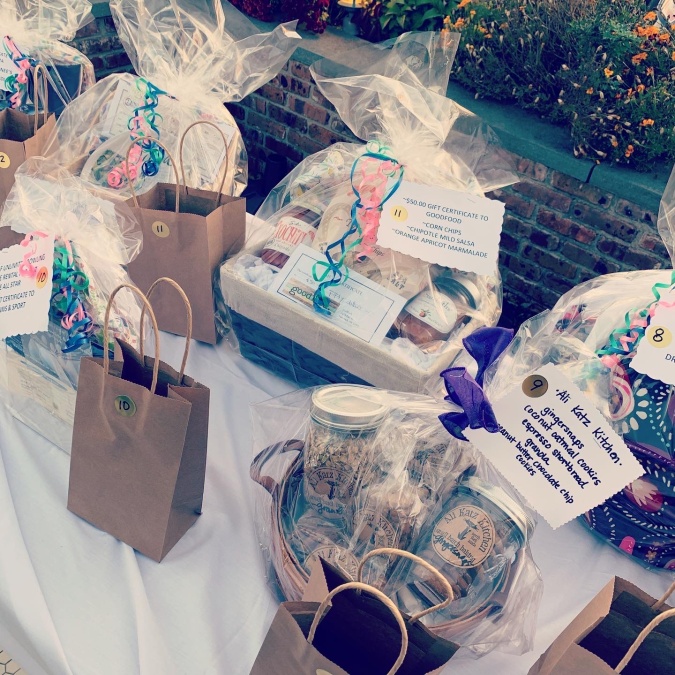 I was surrounded by everyone who loved me and got so many hugs.

I saw friends who drove from far away.

Friends who live close but I’ve been too involved in cancerland to see.

I called my brother rob and FaceTimed him in from North Carolina and he saw my nieces and nephews quick.

I had my colleagues from school and sorority sisters. 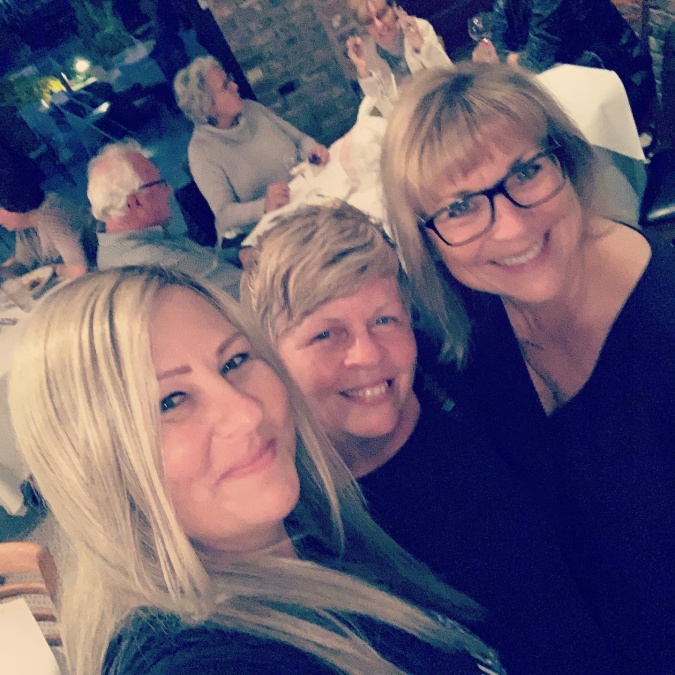 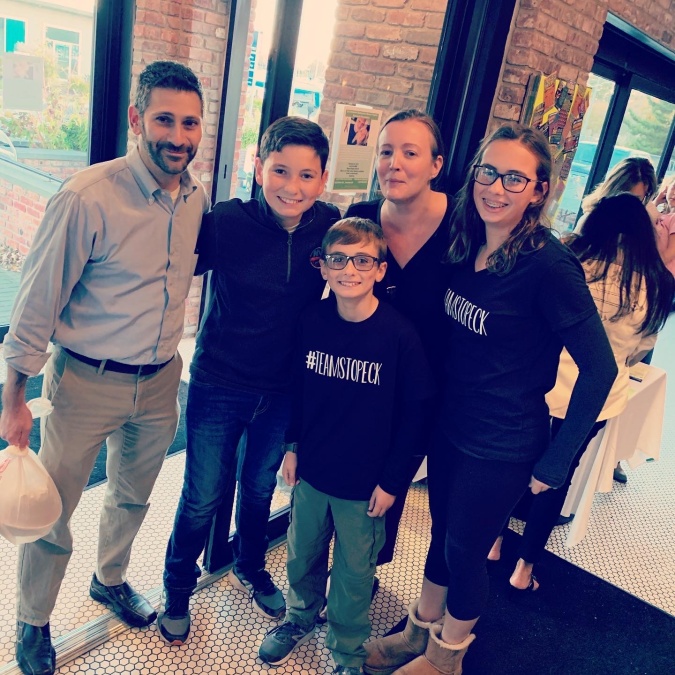 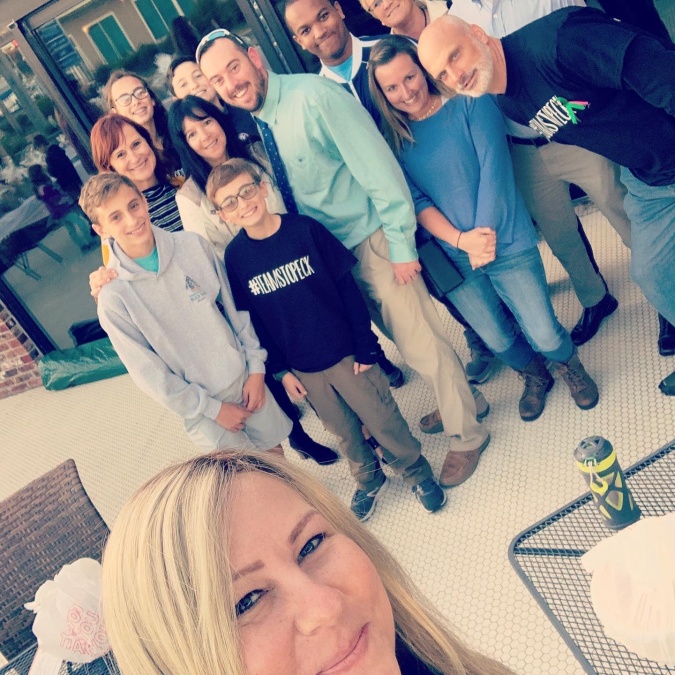 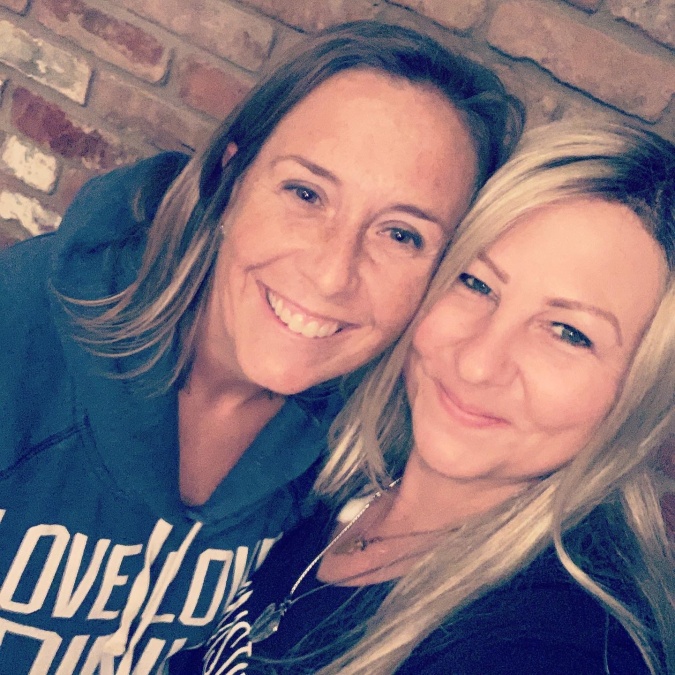 My kids Sunday school teacher and her husband Nick Krupski.

I dragged my hair stylists/friends to the bathroom and showed them my bald head. By. Either scott was there and we did a bald head contest. (And apparently, if you put two bald heads together, it looks like a butt. Who knew?)

Paula and dori and Steve and Heidi from yoga and the giving room were there. I kept looking over at them and felt peace. Claudia from north fork table came and I said to myself when I feel better I’m going to go and have one of her james beard award winning pastries as a treat. 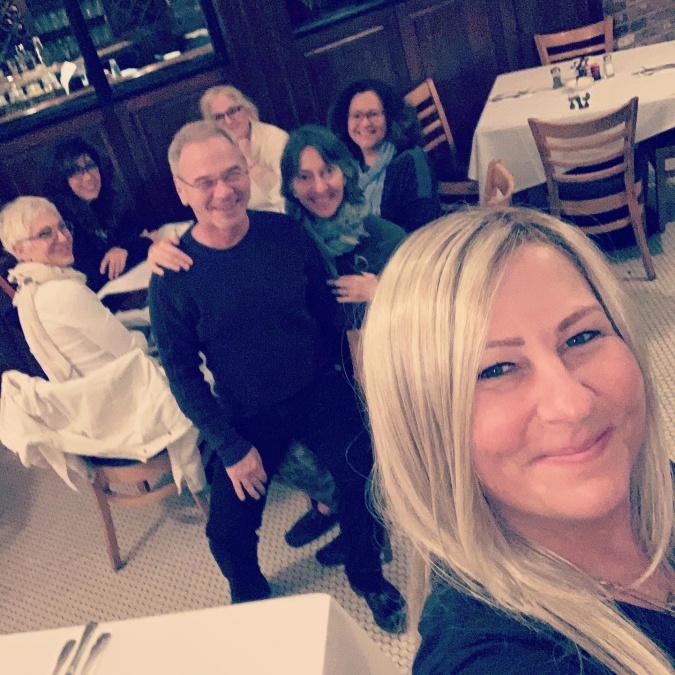 My Latin squad represented, as did my Bailey clan.

Penny came and got to see so many of our former students and families. The riverhead PBA was represented by my sister, brother, and two other officers who donated to my doctor. 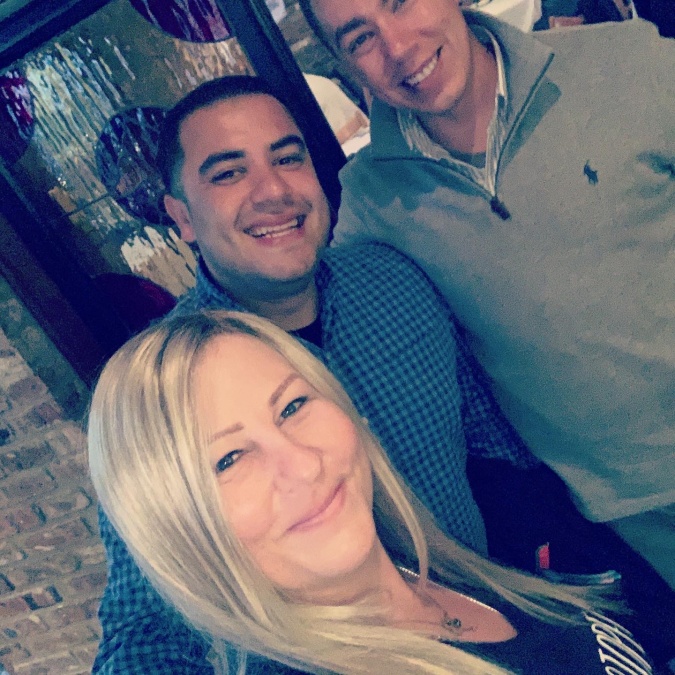 My swim sister Melissa Jordan came and i cried because I miss my swim family every day. And a woman who has already put up her christmas tree is my soul sister.

I was surrounded by my heroes.

Nick Coutts and I finally met. He had been in a horrible motorcycle accident last spring. The didn’t think he would make it. The h didn’t know who his mom and sister were, and that Nick had a whole “Coutts corner” supporting him. He and I hugged several times and he eminates goodness, love and miracles. (And his mom Tess? One of the strongest and funniest people I’ve met.)

Darla Doorhy came from Kait’s Angels. Her daughter was killed when she was hit by a car a few years ago. She has turned her grief into action, and spreads hope and love everywhere she goes.

I saw Todd and Tanya Newman as well. Todd was my blunder when I bartended at claudios in my previous career before teaching. Their son was diagnosed with cancer and spent the last year and a half going through a grueling treatment. He is all good now, but people need to remember that it isn’t really over. Now the true healing begins, and support is needed more than ever.

My Witt family, which I’ve taught all three kids, and have been friends and supported to us through their own trials and walks through fire. 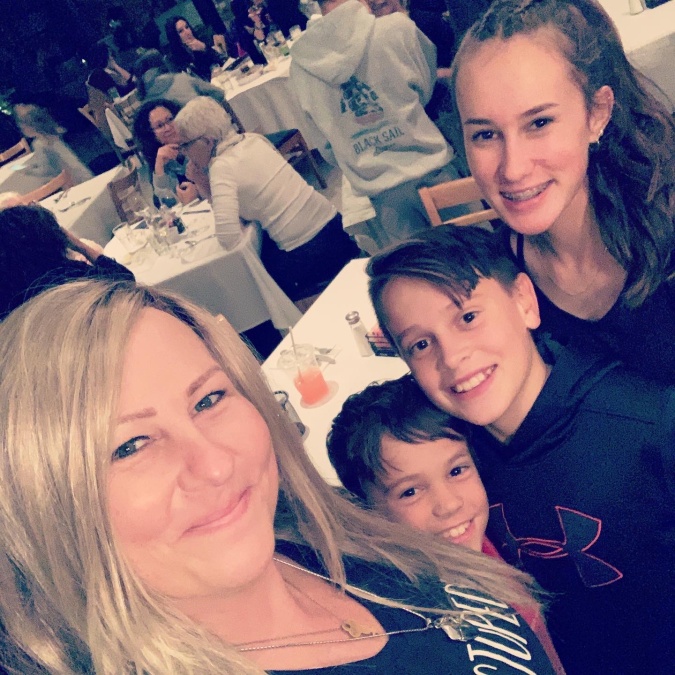 The Lodi family came and spoke about the dads healing from a bad motorcycle accident. I introduced him to Nick Coutts so he could see the healing that will be coming. I also told them about my friend Tammi, whose son was in a similar accident and is doing so well.

That’s why we need to tell our stories. So people can someday look for people who persevered and know anything is possible and miracles are real.

I tell my students I go superhero school at night.

Class was in session.

I was surrounded by superheroes, people who came back against all odds. People who live ordinary lives and do extraordinary things. Even the people who just thought they came and ate some spaghetti.

That plate of spaghetti could be one brings about the next breahthrough in cancer research. 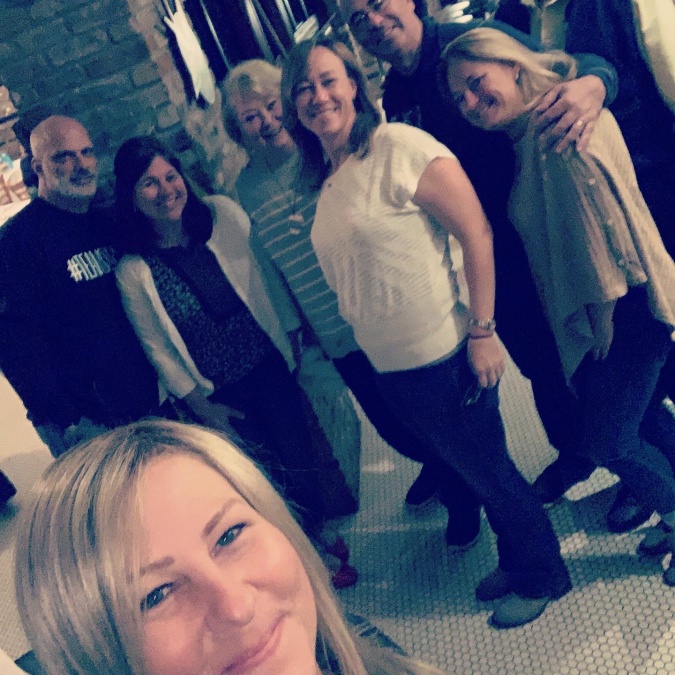 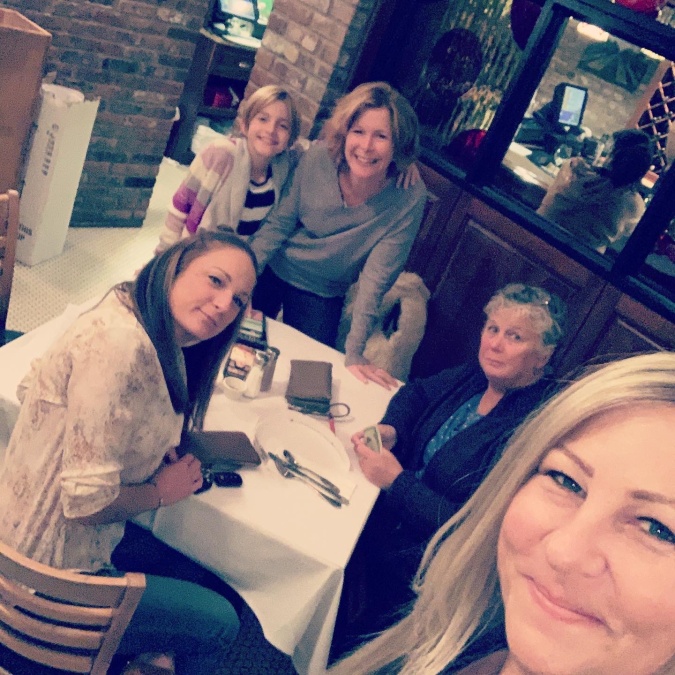 We left at 9:30 as I was exhausted and really nauseous. I think it was more the hunger than the meds. I slept well, and am detoxing now.

It was a good day.

It was a great day.

Thank you to everyone who sent love, came to eat some spaghetti, tried to win raffle baskets. Thank you to strangers who have become friends.

Thank you to family that has supported us every single day.

I’m the luckiest girl in the world.