Today is round three of four.

I’ve started the fast, and man, it’s hard. But I keep thinking of the end goal and looking at my kids.

Yesterday was a great day, and we did a pumpkin hunt in our little magical courtyard. My friend Anthony Meras from Star Confectionary purchased mini pumpkins, enough for every kindergartner. I wrote their names on the bottom, they were hidden in the courtyard, and the kids were told they had to find the pumpkin with their name on it. This way, the pumpkin picking lasted longer. It was just the sweetest thing ever to see them all searching for their very own pumpkin. I’m telling you, kindergarten is just magical sometimes.

There was another article on our district and our issues. One of our schools is at 115% capacity. The state has left us high and dry. The town hasn’t kept up with code enforcement on illegal rentals and keeps adding more apartment buildings. The school is mandated to educate every child that comes to our door. We aren’t allowed to say, “The inn is full….”. We need solutions now as well as long term. Everyone is angry and you can feel the anger radiate on the comments on local articles . Some are just yelling and complaining, some are bringing up valid points but come across so antagonistic the message is lost, and some are working hard to try to find a solution. I actually discovered I’ve been banned, blocked, removed from a new local group. I don’t disagree with the issues they have been tackling, just the anger and tone, as the message gets lost behind the anger. I guess shutting out those who disagree is the new American way. (And yes, I’ve blocked people recently, but only those who are unstable or have personally attacked me, totally different.) It says a lot to me that I’ve been kicked out. I guess a kindergarten teacher with opinions isn’t welcome. It’s a shame, and I hope they learn how to work with others. I’ve got bigger issues to work on and will do so with people willing to have civil conversation. Lawsuits are now being threatened against the district. People keep piling on and we are just trying to educate children. Facts are still being distorted, and people are still saying the huge sports building is on the bond. Please go to meetings and find out the facts.

And maybe realize that our district has been left abandoned by our state, which piles on more mandates and rules while choking us. One of our BOE members said her emails and letters don’t even get answered anymore.

We need to work together and find solutions now. I don’t know how that will happen though.

We seem farther apart than ever some days.

There was an article on our town as well, on code enforcement, with one side saying they’ve been trying to clean up the mess the previous administration left behind, and hiring more code enforcement would add to the budget. The other side said it’s only just become a priority because it’s election year and it’s grandstanding and enough hasn’t been done and facts are being twisted.

I really wish people would find a way to tell the truth. Stop trying to put things out there to make people look bad and instead work together to make our town better.

Reading the local articles can really make you lose faith in humanity.

On the day of the third heavy chemo treatment…

Total strangers team up with friends and my sister to host a spaghetti dinner to benefit my oncologist. A former sorority sister and a former PTO president decide to add a Chinese auction. So today, after spending all day in the hospital getting chemo, I’ll head to Jeni’s Main Street Bistro in Southold, where they are hosting and spaghetti dinner fundraiser from 5-9. I’ll be exhausted and hungry, and being around people who are helping to raise money to help my oncologist and her research will be the perfect medicine for the end of the day.

I also received an email from the hospital that my former employer, Riverhead Building Supply, sent a check for $2,000 to their research foundation and Dr Stopeck. I worked there right after college and made friends that I still have today. It started as a small business and has continued to grow. As their business has grown, so has their hearts. You can always count on this business to come through. That’s why it’s important to shop local businesses. They are the heart of the town.

Rob and I are heading in to the hospital around 10-10:30, getting the port accessed, labs drawn, then walking downstairs to see my oncologist. It’s always a weird feeling to walk around with a tube sticking out of my chest. I’ll be examined and we will make sure my counts are good enough for me to get the chemo today. Rob and I have a surprise for my doctor, and hopefully it will make her laugh. We are hoping that in November we can give her a check with the donations and I’ll get good scans for the first time in almost two years. We are also praying the tumor markers begin to drop.

I’ve got one more heavy chemo treatment scheduled on November 7th. That night I’ll go play in a fundraiser the union is hosting, the Harlem Wizards. (There will be a new flyer coming home as we had a typo or two.). Its a great night for a great cause, and what better way to end this treatment than to be surrounded by wizards?

Today may the chemo kill every cancer cell that is left, may people learn how to listen with open hearts and work together to problem solve, and everyone enjoy some spaghetti for a good cause. 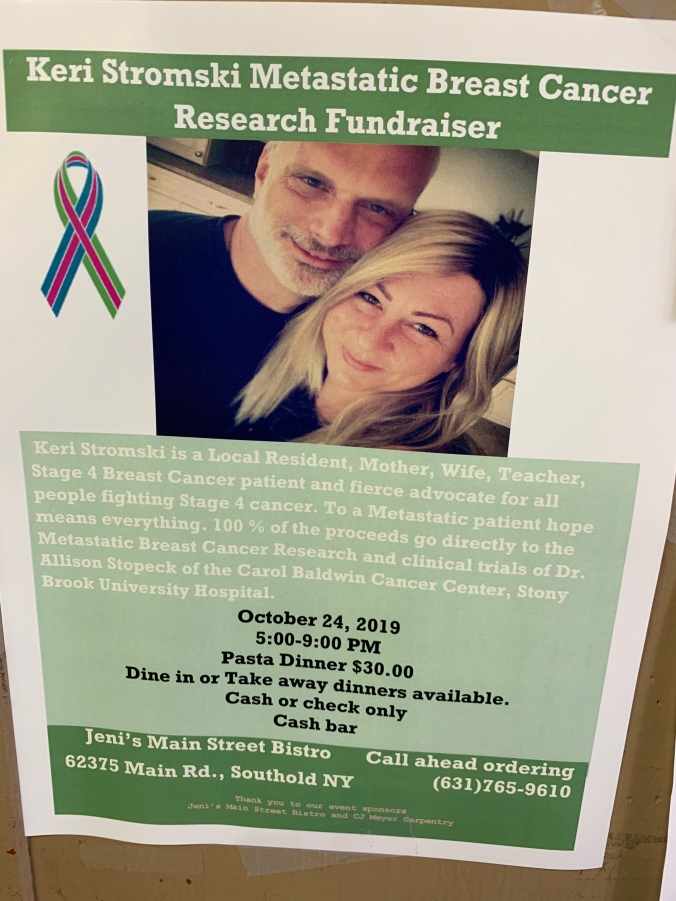