I did not want to go.

I didn’t want to protest.

I didn’t want to meet new stage four women and find new friends when I’ve had three close stage four friends die so quickly and so close together.

But that is why I went.

The acting president of MetUp told me the details, it was being kept quiet, and one

of the organizers had read my blog and really wanted me there.

My amazing husband and kids agreed to go with me, and we were up at 5:00 am. We still didn’t make it at the time we wanted, and due to another marathon we had to park on the other side of Central Park and run through the park…after having biked ten miles the night before.

We called the group and ended up deciding to meet at the race starting line.

Let me be honest.

For many stage four women, these races and walks are hard and heartbreaking. We are surrounded by the sexualization of this disease. Shirts with “Save the boobies” and “Save the tatas” aren’t cute. The celebratory mood is for the lesser stage women who think they have beaten it and don’t want to look at the scary stage four people. Thirty percent of them will end up like us. Every single breast cancer survivor should be clamoring for more research.

You may be me someday.

The research now may not end up saving my life, our lives, but we fight for the women and girls who will one day hear they have cancer in the future.

We chose to protest in black. It made us stand out in a sea of pink. We wore shirts and hospital gowns and had IV poles. The police quickly stood by us. 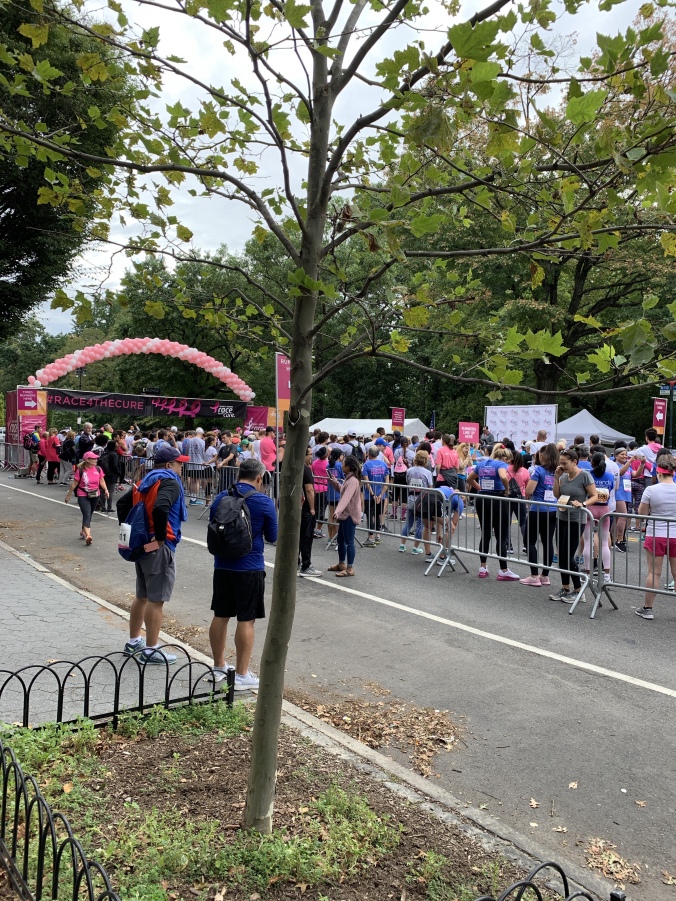 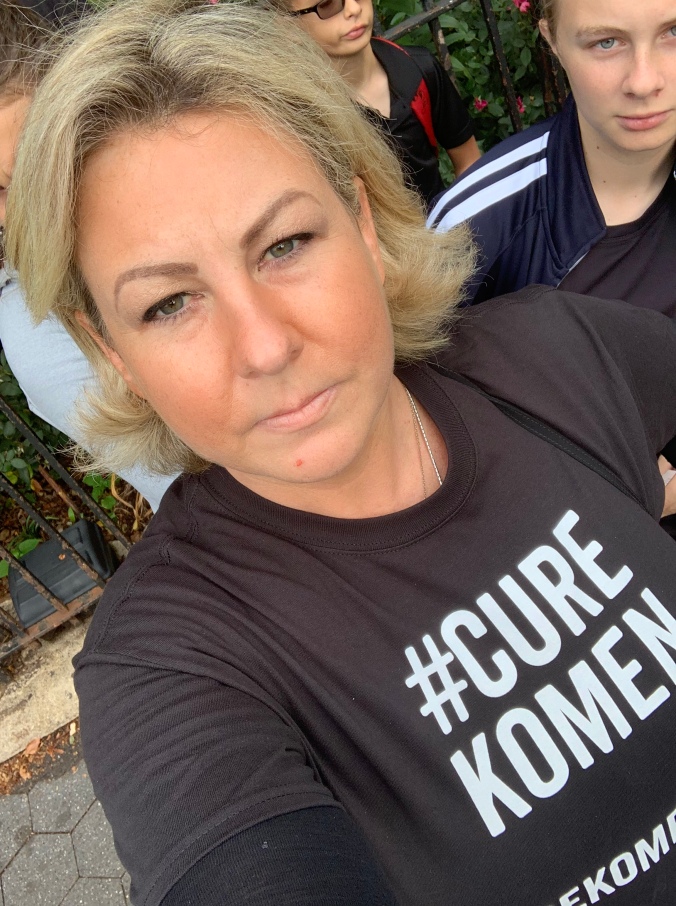 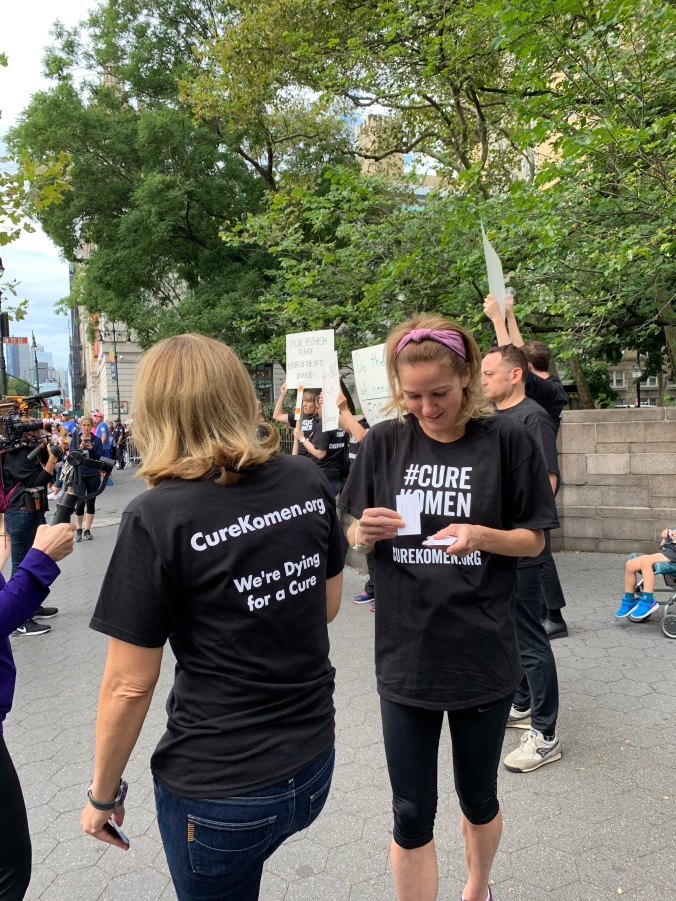 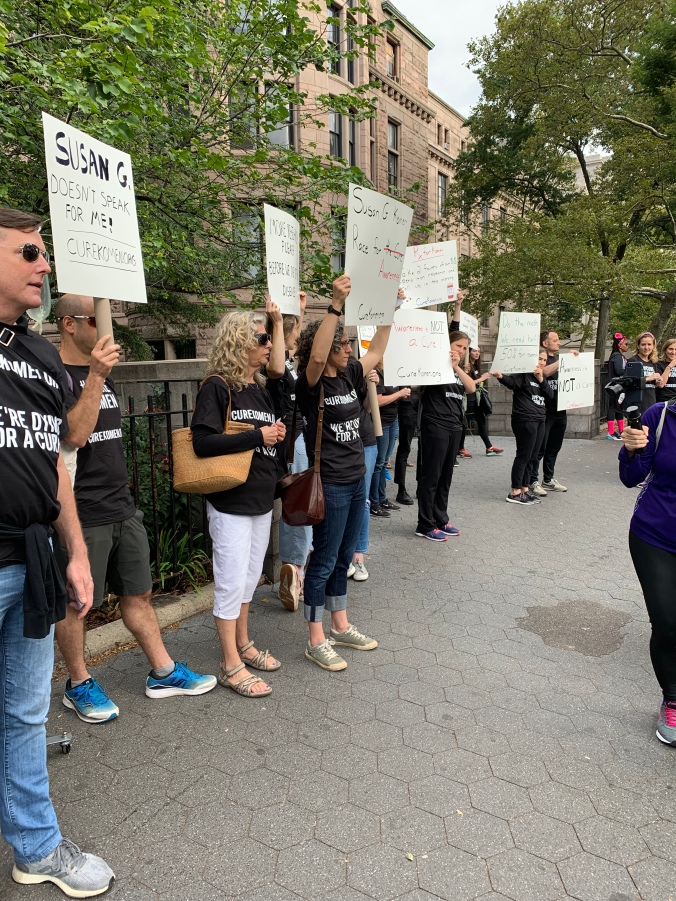 Across the road were all the cute and rah rah announcers . They kept staring at us like we crashed their party.

Runners and walkers were confused, and some came and asked us why we were protesting a breast cancer “race for the cure” event. You see, Susan G Komen only donates 19% to research. 50% goes to “education and awareness”, a very vague term. The rest goes into administrative costs and their pockets. We are asking they flip the percents.

I think everyone knows by now and is aware.

Being aware won’t save your life.

A mammogram didn’t save my life.

It is simply a diagnostic tool to say “stage IV, terminal.”

I followed on Twitter a metastatic breast conference and several of the drugs I’ve tried have only recently been approved. It takes YEARS for research and drugs to come to fruition.

And it takes money.

Enough with the pink washing.

Enough with the “awareness”.

Spend every penny on research and save our lives. 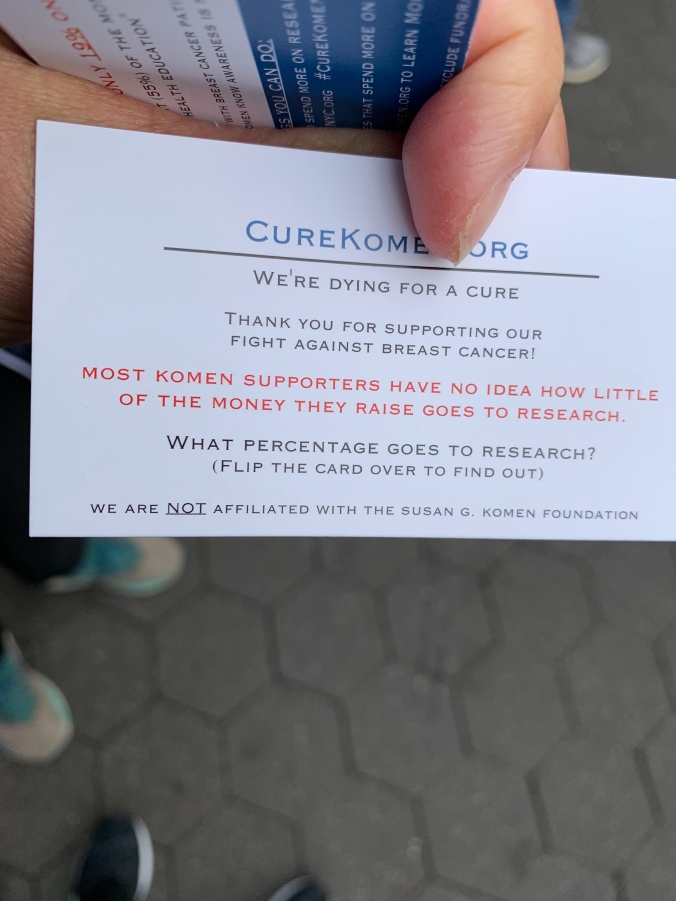 I chanted along with the others and it was hard getting stares by people walking, and it was especially ironic because they were walking for me, or so they thought. But you can’t tell because I look “healthy”, despite having been on six different chemo regimens in three years and have pet scans that light up the liver, spine, hips and breast like a Christmas tree.

I met Beth Caldwell’s best friend Paige. Beth is the Rosa Parks of metastatic women. She passed away in 2017 and her name is revered .

I also met Susan Rahn who is the acting president of MetUp.

The hard thing is so many women die within two or three years, and by the time you are educated enough to get angry, and start to protest and speak up, things go bad and death comes knocking. Talk about a high turnover rate. How ridiculous that patients in active treatment have to beg for research?

When it was over, we all took a picture together.

I hope everyone is still alive next year. 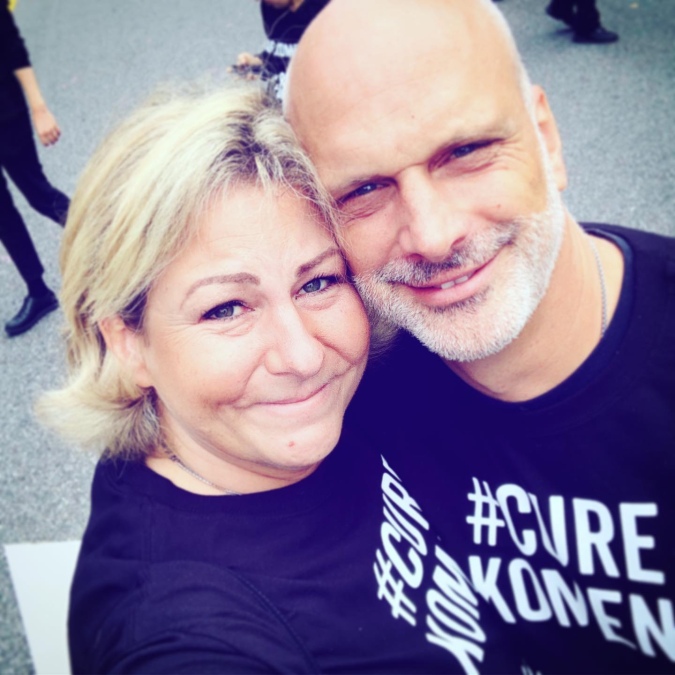 I’ve gotten good at that.

We then switched gears and I stopped being Norma Rae and became mom.

I’m good at switching my role too.

We went to the museum of natural history and spent time as a family. Then we went to Times Square and Rockefeller center, followed by a visit to Saint Patrick’s Cathedral. 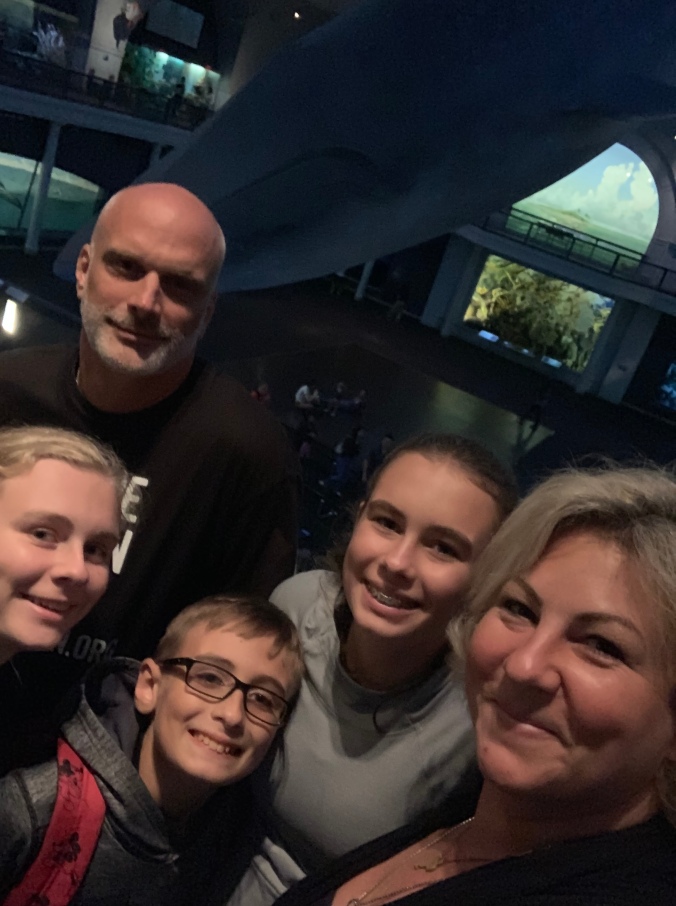 I cry every time I go in there, and went to my own sacred, special prayer spot in the wall. I prayed for my friends and family, and thanked God for my life. I thanked Jesus for healing me and declared I was healed, Pet Scan be damned.

Then we went into the back prayer room, and as we prayed, I looked at rob and the kids, all with their heads bowed and praying so hard and intensely. Please God, let me continue to love and live with this precious family I’ve been blessed with. 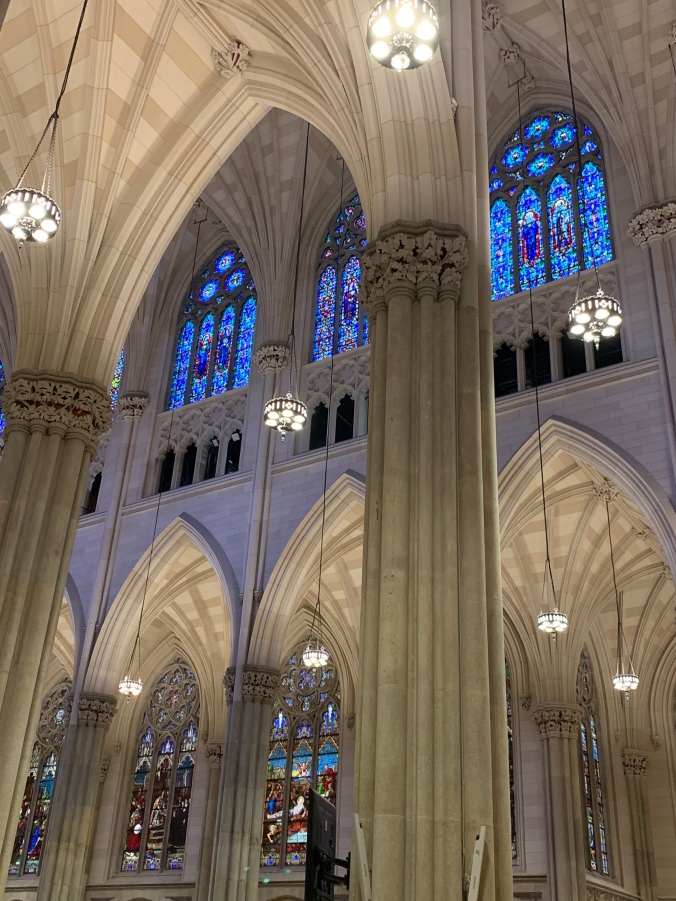 We took a taxi back to the parking garage, and within a minute of it pulling away, I realized my phone was in the taxi. We panicked, tried calling my credit card company, the taxi company, but nothing. I used madisons phone to track my phone on the Life360 app, and called it. Within ten minutes a young man named Josh called Madison’s phone and said he had my phone and all the money in it.

We ended up meeting him and he refused any money reward we offered. He said to just say. nice things about New York. He texted Maddie’s phone after we left and said he wished he told us to donate the money to Susan Komen after noticing robs shirt.

I texted the real reason he had that shirt, and said I would donate to metavivor instead, and he agreed.

God bless Josh. We love him and his honest, kind heart.

We drove home, went food shopping, made dinner, and went to bed.

MetUp is beginning a large action campaign and social media blitz to push Susan G Komen to stop using the word cure when most of the money they raise doesn’t go to cure but to awareness. People were shocked when they heard the percentage at the walk. Research where your money really goes. MetUp is staring a campaign called #curekomen. The Aids activists became loud and look what happened. It became a chronic disease instead of terminal.

That’s what we want.

In our lifetime, preferably.

But as we went to Rockefeller center, I was in the same place I was standing when I heard Alycia Ronnenberg had passed. I touched the necklace that Leila ForsytheAlvarez had her mom Terry send to me after she passed. I thought of Lisa Sheridan Crane and her tips to survive chemo, and the pain of her passing this past month.

I’m tired of my friends dying.

I’m tired of the pink.

I’m tired of the parties and celebrations and rah rah rah when so many are dying every day.

Make a difference that matters.

Help us live, and I promise, when that happens, I’ll wear the brightest pink freaking tutu ever.