Today is the last day of summer break for me.

It’s been a summer.

Morgan and Quinn went off to Camp Kesem and spent a week with other children whose lives have been affected by cancer. They came back braver, more confident, more anxious, more independent. God bless Camp Kesem. They are a great charity to support.

Madison spent two weeks at the NJROTC Leadership Academy. She spent the first week crying, being screamed at by a marine Corp drill sergeant, slept on the floor so she wouldn’t mess up her bed, did 100 push ups and sit ups a day, ran four miles a day, and studied her ass off as she also learned to sail. I offered to pick her up when she finally Could contact us, as well as have a “conversation” with the marine. She declined and stayed. The second week…she soared. At the final ceremonies, she was awarded top Cadet of her platoon, and was nominated to come back by three different instructors to be a leader next summer. 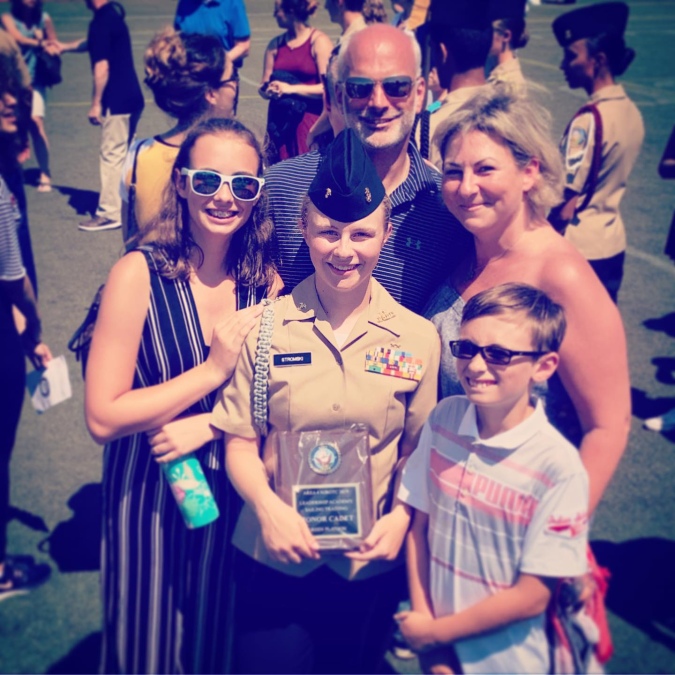 She also realized that although she excelled, ROTC in college is not for her, and scholarship dreams flew out the window.

We picked up her and went to Salem for two days for our family vacation. We were moved by the history of the Salem witch trials, and the walked and loved every inch of the town. We even got wands to make our own magic from an amazing wand woman. 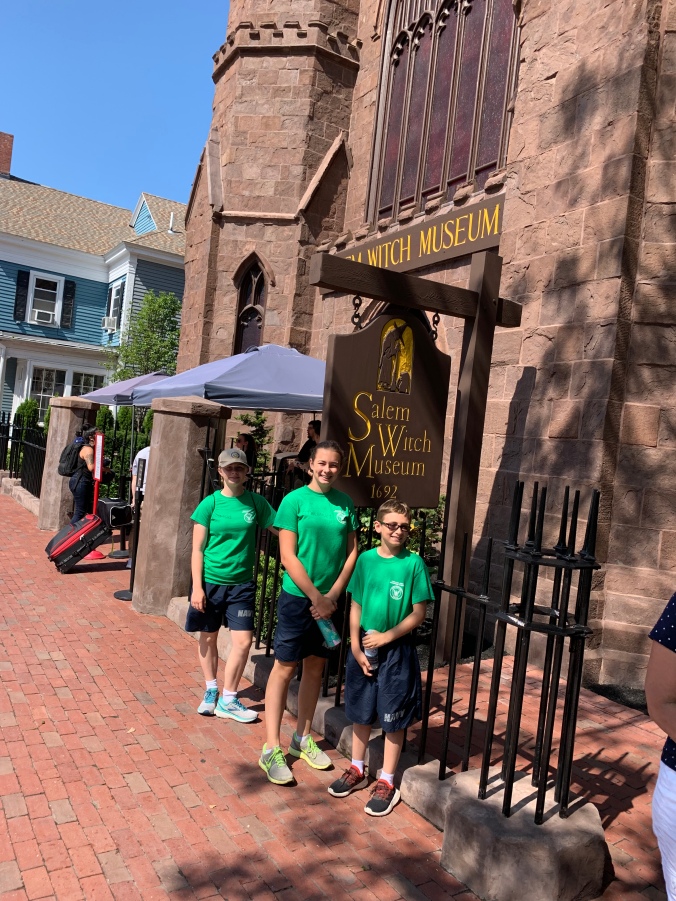 Then we dropped off Morgan at St Johns University for a week of STEM. She learned about forensics, engineering, medicine and robotics. She made some friends and worked hard. 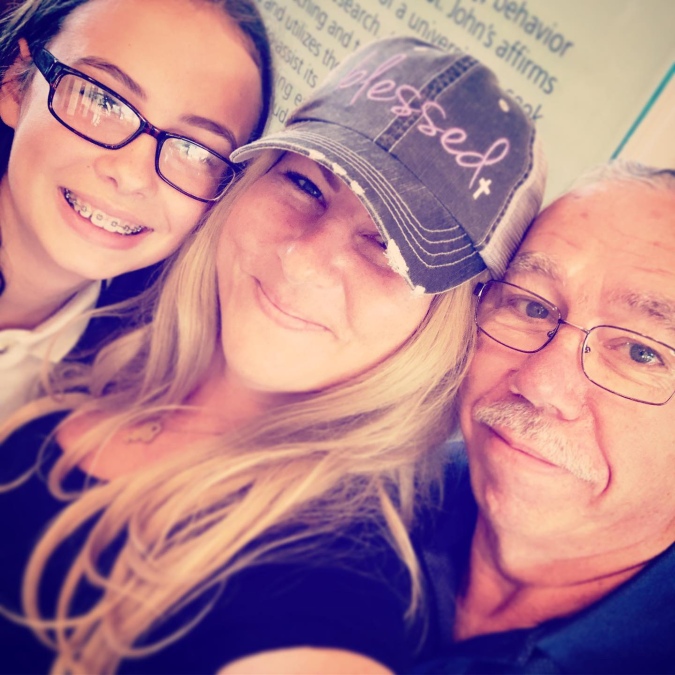 Quinn went to Boy Scout camp, where he thrived. He lived in a tent and was so well cared for by the men and women who volunteer their time. He received his first communion wafer in the woods, and will always remember that moment. We went up to see him and made some new friends. This was always robs thing, as I did the Girl Scouts with the girls for drop offs and events. I am so glad I went and now know first hand how beautiful the scouts can be for the boys. I’m so glad Quinn is in this troop. They are having a memorial walk for Andrew McMorris, the young Scout who was killed by a drunk driver last September. Quinn looks so much like him. Please think about him and don’t drink and drive. There is a walk for him this September where the troop will finish the walk he couldn’t. God bless troop 161. 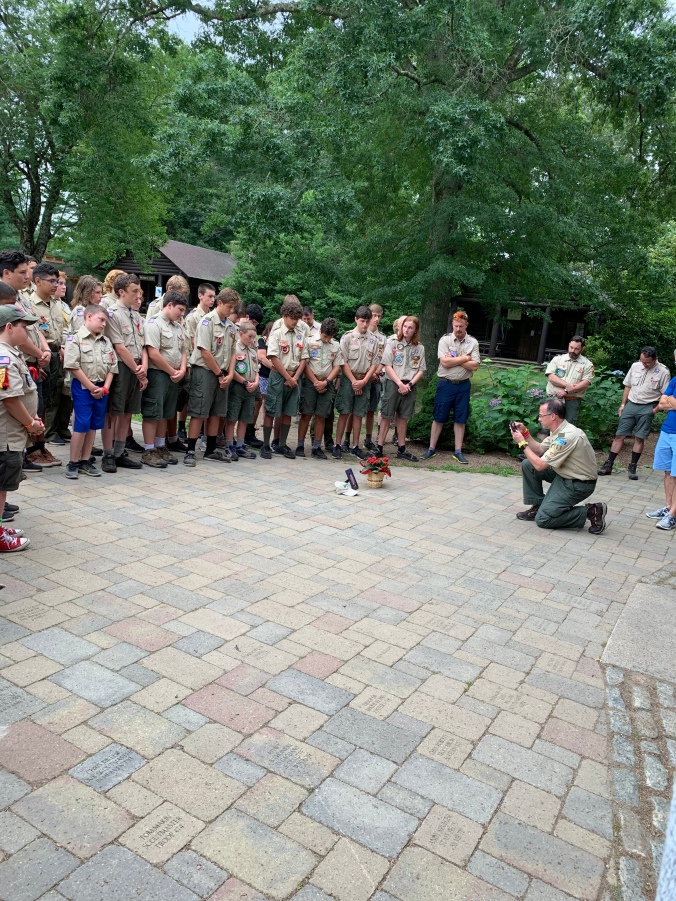 Quinn came home and off we went to New Hampshire to see what mountain and lake life is like. I was surrounded by God’s beauty every moment, in the rain, in the sun, in the forest, in the lake. I spent two days with my sister’s family and was at peace. 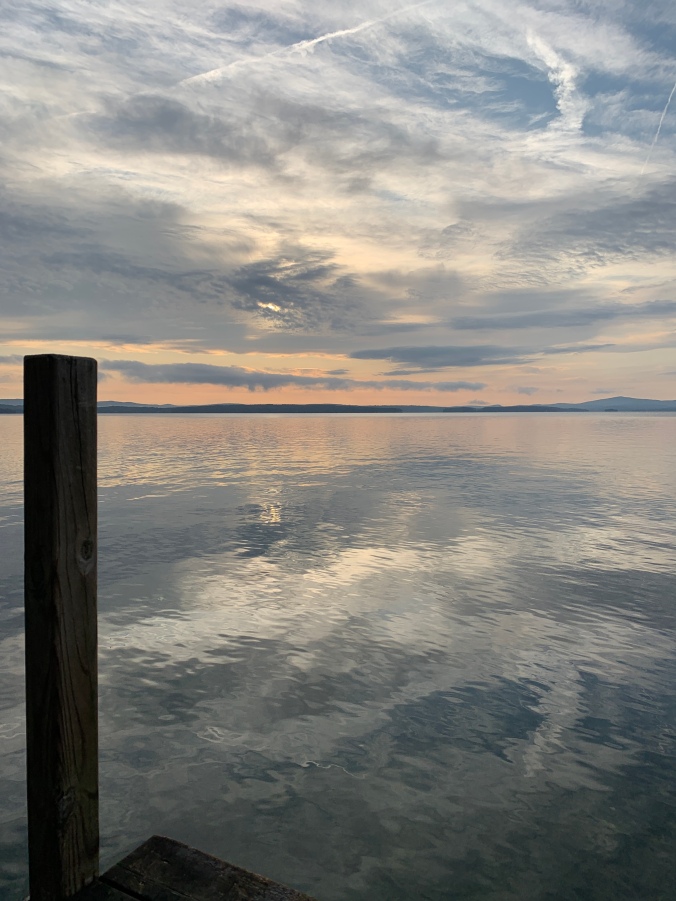 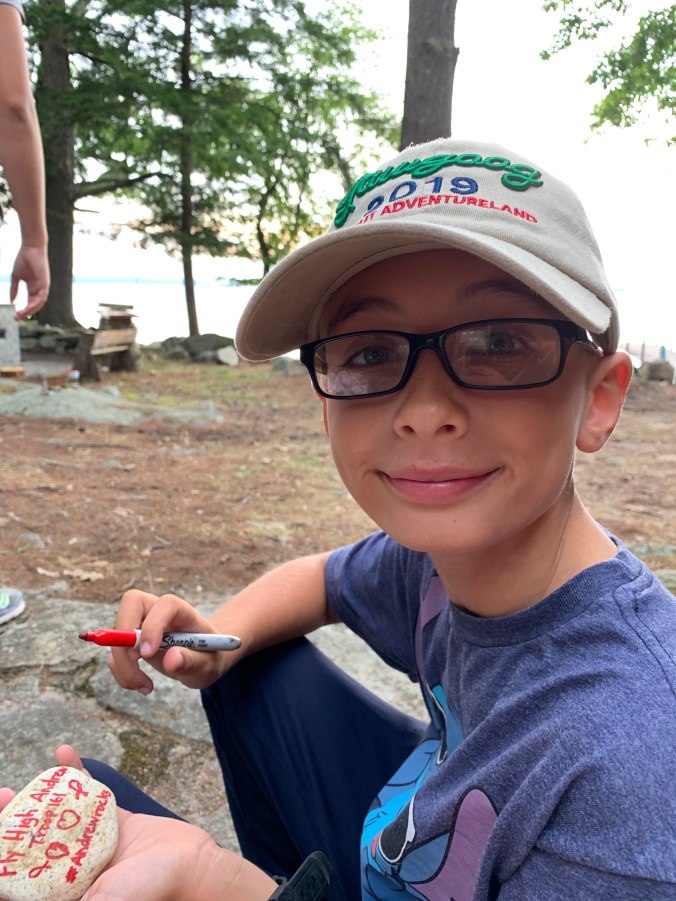 Madison meanwhile, worked all summer as soon as she got home from NJROTC camp, and spent every day working on summer homework assignments. We need to take a good hard long look at AP classes. These kids are burnt out and school hasn’t even started yet. Throw in all the parents of recent graduates telling me some colleges don’t accept AP credits, and many of the kids don’t even end up getting top choice… and it makes me frustrated that she spent most of her free time at the computer instead of relaxing. She had friends over last night and they all also worked summer jobs and did homework. What are we doing to our kids?

As for me and rob…

Rob worked all the time. He also did his first Facebook post ever and made a fundraiser for his birthday for Metavivor. You see, all he wants for his birthday is more time with me. I’m already seeing Pinktober crap in all the stores for October Breast Health month. All that money raised goes to the pockets of the companies, and only 2% -5% goes to research for stage four….. the only stage that kills. Stage four needs so much more. We are all still terminal. Someday we hope medicines make it chronic, but for now… everyone is still dying. He raised over $3,160 in a week. I had a similar one a few months ago, and between us both we’ve raised over $7,000 for Metavivor. This October, if you’re going to support breast cancer, the North Fork Breast Health Coalition and Metavivor are the ones to support. I’ll be walking in September at Tanger and raising money for the NFBHC, so come walk with me

As for me… I lost two more of my dear friends with cancer. Leila and Lisa. Both came as a shock. Leila has messaged me a month earlier she was waiting for a drug to be approved by her insurance company and was struggling, but still had hope. I messaged her and texted her and didn’t hear back. That’s when I checked her Facebook page and saw she passed the day before. I cried and cried. After my Alycia passed, I still had Leila. Now? I dont have either of these women who becamemy sisters. But her mom has sent me a key necklace and shirt that Leila left for me, as well as buttons from her service. Her mom has her phone and still follows me on facebook. I send her love every day. I’m still on private settings, but people tell others my story to give them hope and faith.

In Four months time I lost them both, Leila and Alycia, my two kindred sisters. Then three weeks later Lisa died. She was the one who spent the entire night before I started IV chemo last summer giving me tips and tricks to get through it. She had stage three years earlier and was my “Kick it’s ass, Keri” friend. Our relationship was different than Leila and Alycia, because she was someone I’ve shared actual breathing space with in my life. We lived in the dorms together at cortland, and I was Hoping to see her in November. Then? A text came from my friend Candy that Lisa died. Turns out the cancer came back with a vengeance in June, and within a month, she entered the hospital, went into a coma, then passed.

It’s because of Lisa that I survived last summer. 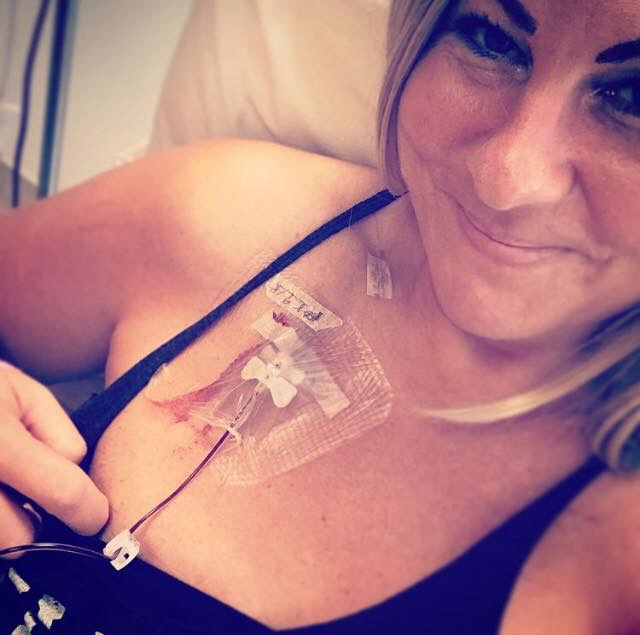 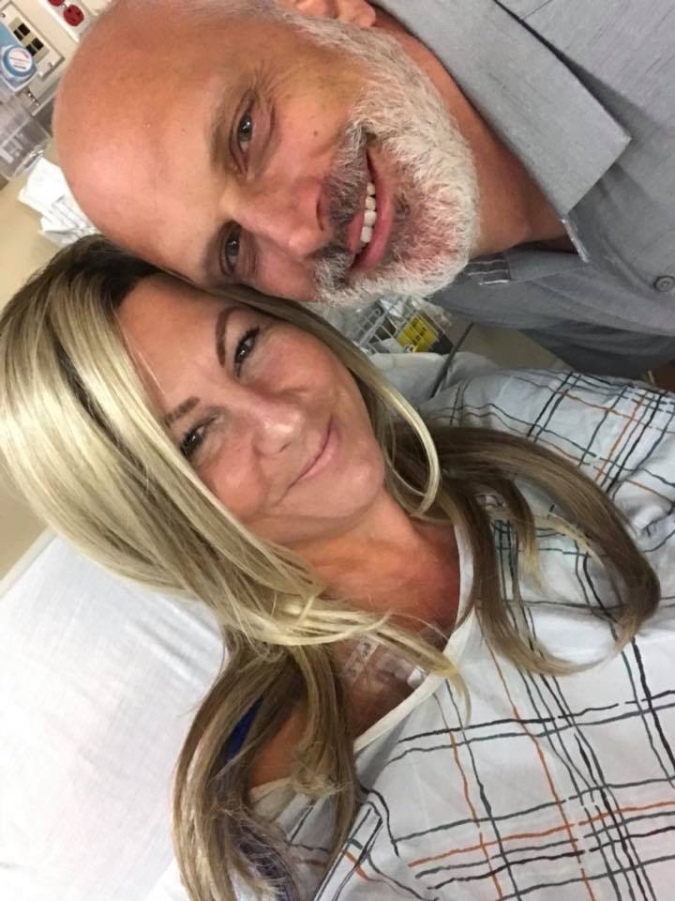 I also navigated the new capecitibine chemo. It’s been mine field after mine field… blisters on feet, skin peeling, eye issues, fatigue, nausea, bathroom issues. Yesterday my fingers started peeling so now I’ve hit all of the side effects and know how to handle each one so I can start school ready.

If you were to see me, you would never know what’s going on inside of my body.

My life still has purpose.

I’m not sure what it is though.

I used to think it was to be a teacher. I fought for the kids, against the stupid tests the state uses that has skewed data. (It’s about poverty, people.) Then cancer hit, and maybe my purpose was to show how faith, love, herbs, juicing, reiki, reflexology, and energy that is all mixed with medicine can help you live with cancer. But then I became closer to God, and Jesus became my best friend. He is with me in the middle of the night, in the mountains, in the woods, on the beach… always listening to me.

Sometimes my prayers get in the way of his plans, and I have to learn to stop fighting the waves and just lay back and float.

Breathe underwater, then kick my feet off of the new bottom I touched and come back up to the surface.

So that’s been my summer break.

I’m nervous and ready to have twenty two little people come into my class and life and heart.

I’ll be super busy, so don’t worry if I don’t post as much.

I’ll be here, living and thriving.

May it continue for years to come. 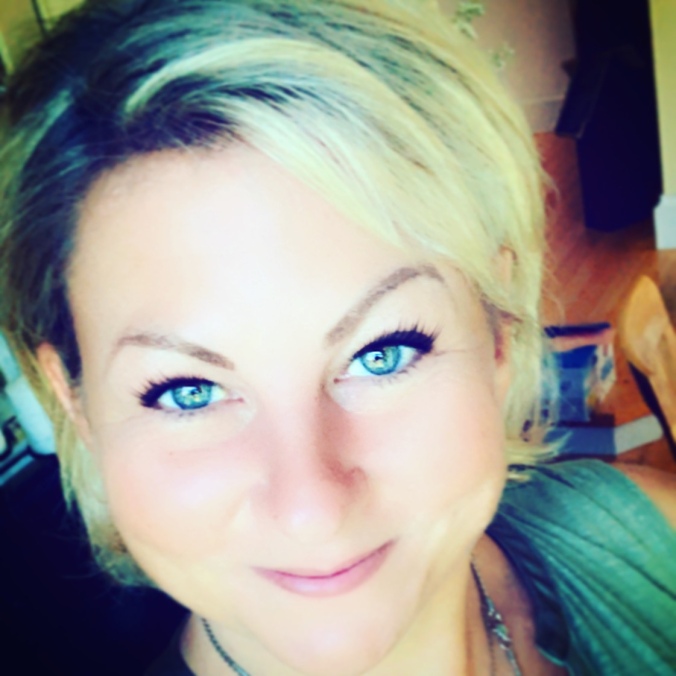 One thought on “My Summer Vacation by Keri…”