I’m in the detox bath and have taken sixteen supplements already, and wrote down about fifteen things I would like to do today as I gear up for school.

Do I know how to kick off the weekend or what?

My CA125 markers came back and dropped 3.3 more points. My oncologist said that because I’m in “normal range”, decreases will be harder to see.

Something came to me the other day that’s important to share.

It happened while watching John McCains funeral. I caught only a speaker or two, and turned it off after a few minutes of Joe Biden.

Don’t get me wrong, I have respect for how he carried on after so many life shocks in his life, but his eulogy made me upset.

Because he stood in front of the grieving family and told them he knew how they were feeling, how it was like being sucked into a black hole inside your chest, and it was all consuming. That the pain was sharp and so hollowing. That nothing can ease the pain. That in six months from now everyone else will have moved on but they will smell something or see something and feel the pain they felt the day he died.

He said other things too, nice things, but man…

When you are sucked into a black hole of grief, having someone narrate it and say just how awful it is may not be the thing to hear at that moment.

He was putting his experience of grief onto them.

Obviously, I think we all know the pain and heartache that comes with death.

Having people speak out and over you detailing just how horrible you should be feeling or they think you are feeling doesn’t help.

When people send cards or say, “This must be so hard, I don’t know how you do it.”, it makes you feel a little worse in the next moment.

You may have been having a great day, and suddenly your narrative is painted differently and you think…”Wait…Yes, it is hard. Wow. How am I doing it? This really sucks.”

But when people say, “How are you?”, you get to paint the narrative yourself. 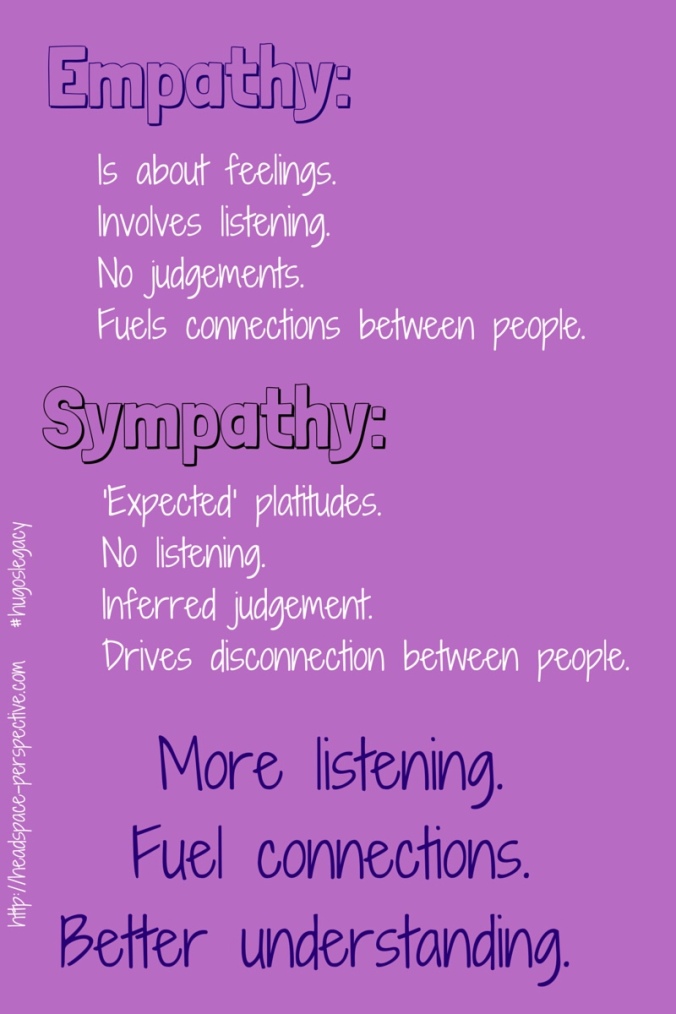 Some people love to tell stories that portray themselves as victims, or stories that are sad, or even sadder than your story.

“Oh, you have cancer? My aunt had cancer. She died after a year. It was hard. Chemo was so rough on her….”

Some people tell stories that can fill you up.

“Oh, you have cancer? My aunt had stage four. She is still doing great after twelve years!”

Some people don’t tell stories, but instead sit next to you and just share your space.

Those are sometimes the best shared story moments.

And instead simply ask how people are feeling.

If you’ve never felt that way because you’ve never experienced whatever brought on the emotion, you’ll have something called sympathy, which is feeling sorry or sad for them.

Instead of saying, “I feel so bad for you…”, sometimes just saying, “I’m here for you” can be so much better.

If you’ve had the similar experience, then that’s called empathy. You’ve been in similar shoes… but not the same shoes, because everyone’s story is their own.

Instead of saying,”Oh, when I had chemo it was horrible. I was so sick and couldn’t work and man, I thought I was going to die”, it may be more helpful to say, “I had chemo too. How are you doing?” 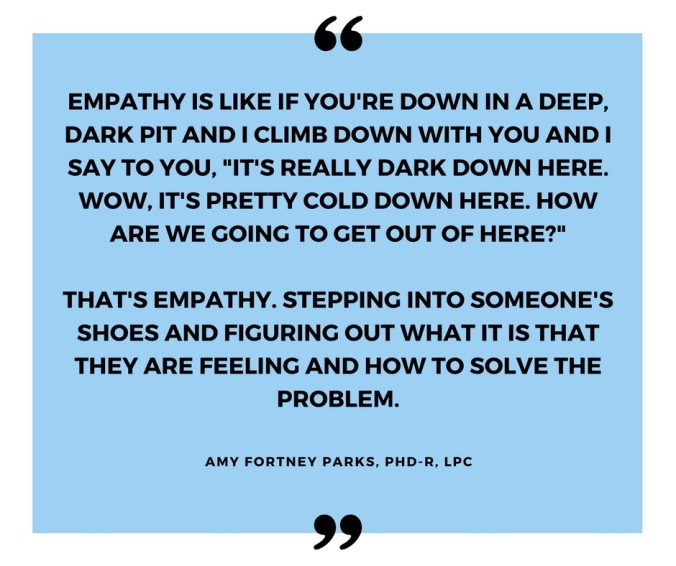 Words have power. They can either bring people down or lift people up.

And sometimes, no words are needed, and simply sharing space and sitting quietly can be beautiful and healing too.

Today I’ll try to cross items off my list, get Quinn an outfit or two for school, and maybe fix my cracked phone screen. It’s day three, and I’m hoping it’s an easy one.

Today may all of our words lift others up, and continue to heal.

PS. Here is a great video from Brene Brown, who I absolutely love.

One thought on “Empathy vs Sympathy”