It was a good day yesterday.

I always love being around my colleagues, as after having worked in this district for over 22 years, they’ve become family. As my children move up through the grades, I get to know more and more amazing people.

I was shocked when I was called up to the stage to lead the pledge, and had a total mini panic attack on the way up.

The whole time I was thinking…”Crap… how does it start???”

I’ve said the pledge every day for over 22 years, but yesterday? For about thirty seconds as I walked up to the stage, I was working on remembering the first three words.

I got it before I got to the microphone. 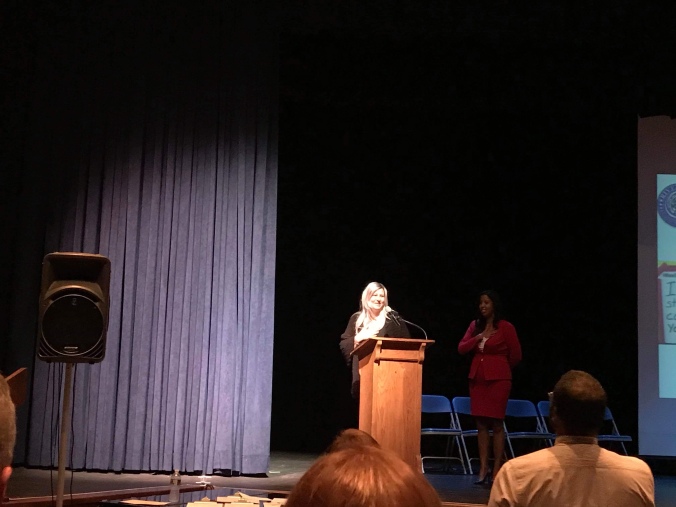 We had a beautiful moment as a staff when a former graduate of our district came back to give a keynote speech. Shamel Lewis was one of those kids who gave his teachers a run for their money. (He has since changed his name to Antonio Diaz). He was removed from his home from CPS at two years old and sent to live with foster families. He was beaten as a child. He was hungry. He was diagnosed with ADHD. His father was incarcerated and both parents had substance abuse issues. He stole yo-yos at pulaski because he didn’t have any toys at home. He can count on one hand how many christmases he celebrated. He told us how he was beaten once so bad for taking popcorn when he was hungry.

But here is what he also had.

Two teachers who believed in him, fed him, loved him.

Because of the relationships that formed, he was told about the two paths he could take. One was the path of his family, and the other was the path to freedom.

He was steered toward sports, and he joined football, basketball and wrestling. In eleventh grade he joined track… and went on to become undefeated. He broke records and went to states.

THIS is why sports matters.

He said he loved school, and worked hard.

He went off to Syracuse university, got his degrees and is currently working on his doctorate. He has formed his own organization, which teaches young men how to become good husbands and fathers. He speaks to schools on the importance of forming relationships with students. He spoke about how he became a Christian, and as a young man , he only heard the words, “I love you” maybe three times. Once he became Christian, he heard it all the time.

It was great, and I think the district should bring him back to speak to every child from pulaski street up to the high school.

He has an amazing one.

The rest of the day was filled with everyone choosing classes that they felt would benefit them. I had gotten to school at 7:15 to set up my class and I am so glad I did.

I brought a whole bunch of yoga mats, flowers, tea light candles, my portable speaker, handouts, essential oils, and had practiced my class over and over the night before. 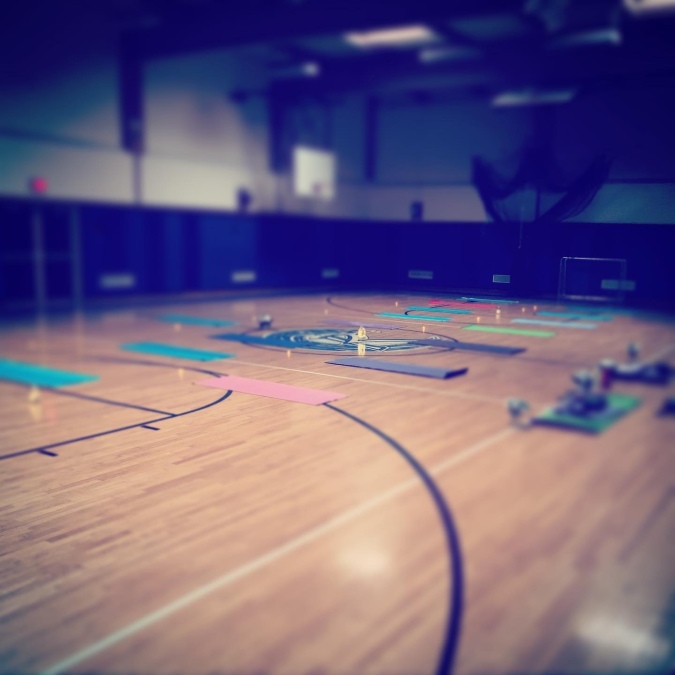 I kept the lights off and as people walked in, the gym was transformed into a sanctuary. I taught two classes. The first one had about twenty six people or so and went smoothly.

The second one had almost forty people.

God sent me over sixty people to teach how to breath, do yoga, meditate and manifest miracles in their lives.

I had more people in that gym with me in one day than my former church has had in their pews in years.

We have so many concerns, and being around others who have the same concerns helped us to feel not so alone and not so crazy.

The day ended and I went home, pretty exhausted.

My back is hurting again. Rob said it’s from all the lifting I did of the crates of yoga mats and blankets. I’m praying that’s what it is.

Today I begin fasting, and won’t eat again until Saturday.

It’s so hard, especially as today is usually the day I begin to feel better and normal. Then BOOM! Chemo tomorrow and the cycle begins again.

I’m anxious about the tumor markers tomorrow, especially after having such back pain and pain in my right thigh bone. I’m praying it’s the neulasta.

Today I’ll teach all day then prepare for tomorrow. I’ll clean up the house a bit as this weekend I’ll be on the couch recovering.

Election Day is over, and I hope the elected officials figure out a way to help our school district, instead of just saying to vote no on the bond. They get to make their budget and only have to have their council vote on it. Hopefully they remember how hard they worked for this election and the votes they got and remember we are working even harder for a more noble cause…

Children like Shamel, who came from such trauma and poverty that he had to steal his teacher’s lunch in order to eat that day. Because voters supported the school back then, he has become an amazing man who is giving back to the society in a huge way.

Today may we all find a way to pay it forward, form relationships that help us make the world better, and breathe.