I pumped my arms up and down a whole bunch before they accessed the port, and it worked. The blood came right out of the tube sticking out of my chest first try, and it was the quickest I’ve ever been accessed, labs, port flushed and then left. 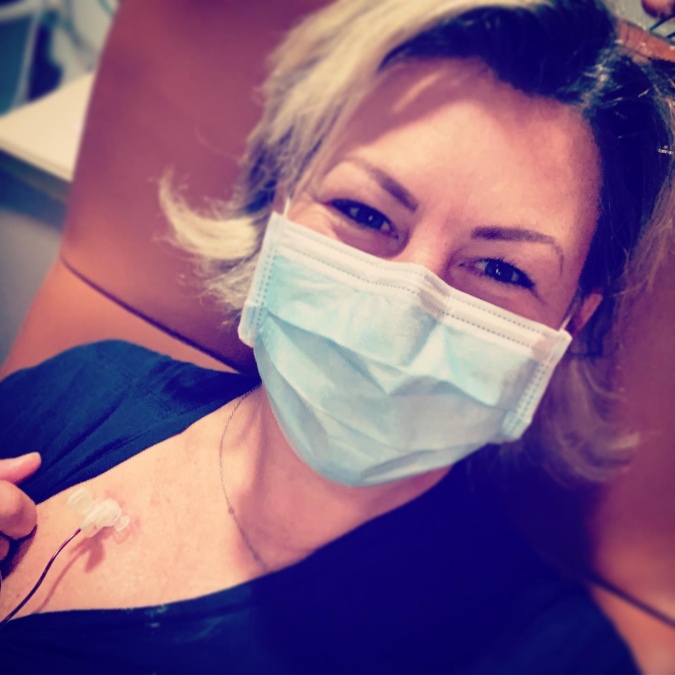 I got right in on time to my appointment. Dr Stopeck walked in with a very young man who looked nervous, and explained he is a new fellow and would I mind him staying and learning. I think she likes bringing them all

In to see me. We spent the first five or ten minutes or so talking about our kids, and she laughed when she saw robs shirt, as she had remarked last visit that he always wears shirts with his name on them. He always comes from work so it’s his business shirts and yesterday he wore a shirt in my honor. We also talked about restaurants, and work ethic. She loves to work and will even sneak in to work on weekends. 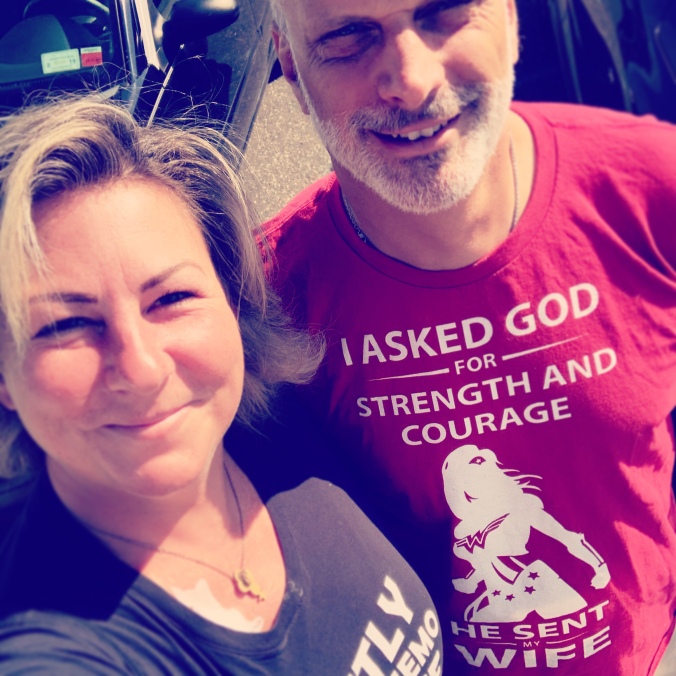 Lesson number one for the new doctor in the room was relationship building.

Then she looked at my feet, and even with the skin peeling and open blisters, they look much better than most. She asked if Donnie Yance has gotten back to me about a clinical trial for the lotion, so I guess she is really impressed.

Lesson number two for the new doctor was being open to collaboration.

She also looked at my leg, and said she thinks the spot on my leg is the xeloda taking care of any sun damage I’ve previously had. She said that all of the spots and skin coming off my body with dryness and everything is like a free chemical peel. I remarked how I have the best tan of my life and have rarely been outside this summer. When people remark on my tan, I say it’s the one side effect of chemo I don’t mind. Better to be tan than yellow. We both laughed.

Lesson number three for the new doctor was some patients can find silver linings even in the darkest of clouds.

My liver panel and tumor markers didn’t come in, but my CBC panel looked good, so she started the physical exam. I asked if I have the PIK3CA mutation as the day the before i researched and saw the FDA just approved a new targeted therapy. I don’t have that mutation, just three other really crappy ones. Hopefully research will continue and I’ll have more targeted therapies down the road instead of just chemotherapy. The young doctor looked surprised and I explained I’m a kindergarten teacher by day and cancer researcher all night. He said “Obviously “. We remarked how my nipple is no longer looking like it’s sucked in to the breast, and she explained the tumor was sucking it and pulling it inwards. I told the young doctor I am always open to other women looking and feeling the breast with the tumors so they know what cancer can look like. She measured the tumor and thinks it’s a little smaller. She also couldn’t feel my liver which is a good thing.

Then she asked if the new doctor could examine me and i said yes. The poor kid looked so nervous, maybe because rob was next to me with a shirt declaring his love. I’ve never been palpated so much in my life. He was very thorough and I talked him through the breast with the tumor along with my doctor. He tried to measure as well, then went looking for my lymph node. I told him the best way to find it, as did my doctor. It’s still quite large under my armpit, which isn’t good. Hopefully it will start to shrink soon. We discussed how the breast has at times felt hotter than the other but not as much as before.

Lesson number four for the new doctor was how to do a physical exam on a woman whose husband is literally two feet away.

Then we talked some more. I told the young man I’m taking Chinese herbs, supplements from Donnie and his Mederi method of healing, reiki, reflexology, yoga, faith. I’m still teaching and gearing up for another year. How Dr Stopeck gave me hope when the others gave me a timeline. Dr Stopeck said that’s what she loves about me, that I’m willing to try new and different things. We told him the initial prognosis of weeks or months and I am coming up on three years this November, and Dr Stopeck said ,”Three years, and look at her. She looks great.” I told him i found research that said the longer you live each year, your percentage goes up for longer survival. She said it’s true because then you get a chance at new therapies.

We discussed the petscan and the tumor markers will tell us when to schedule it. We said goodbye and I shook the young mans hand. He thanked me for helping him, and i told him he had soft hands, which was nice.

Lesson number five for the new doctor was you can learn from your patients.

Above all, he saw how we are a team. We listen to each other and have a great relationship. That’s the most important lesson.

The metastatic world yesterday was furious at the Susan G Komen foundation. A football college coach’s wife passed yesterday from stage four. Susan G Komen decoded to use her death to say they will help breast cancer even more and early detection is the key

They only state the five years bullshit statistic. They never state the sixth year.

If you were stage one and “cured”, but become metastatic at year seven, your not included in their data. Your death won’t count.

Early detection is good, but ALL the money needs to go to research for stage four now.

Don’t run for the Tatas. Don’t wear shirts for save the boobies. Don’t get sucked into the pinktober crap.

None of that helps those dying of stage four.

(Phew. Got that out)

We left and got Quinn his birthday gifts at the mall. He is past the toy stage, and wanted a new Boy Scout watch and a hammock to hang between trees. We don’t have trees in our backyard but we will figure it out.

He had a good birthday, went sailing, got texts from my sister and brothers, and we went out to eat at Cowfish. We left and got him ice cream, he opened his presents and went to bed happy with his new hammock.

Today he will have some friends over to celebrate.

I had some bouts of crying yesterday, but I’ve gotten really good at a good quick sob fest and a minute later pulling myself together and smiling. I am doing my best to stop thinking about the finish line. The finish line is for the ego. The journey is for the soul.

I start cycle four of chemo today. We still don’t have the numbers in hand, but I got an email that Dr Stopeck was happy, and the CEA dropped from 50 to 45. Tending down is a good thing. Donnie also has agreed to a clinical trial, and the discussion between these two great minds will be set up in a few weeks hopefully.

Thank you all for your wishes for Quinn. He knows exactly who loves him.

Today may this new cycle of chemo go easy on me and my body begin to tolerate it more as it attacks the cancer.