Yesterday I was full of awe and grateful for this organization.

We didn’t plan at all on going up to Camp Yawgoog, as rob had some work to do and it was my second day off from chemo which could be rough. But Quinn called and said all the parents were coming up for the ceremony and he wanted us there.

That’s all we need to hear, that he needed us, and we were there.

As we entered the gates, it was like we went back in time. All of the building were made of logs. There were trees everywhere, and a beautiful lake. In the main area there were three different places of worship, a synagogue, a Presbyterian and a catholic worship cabin. There was a little museum that had all of the history and then there was a trading post for the kids to buy snacks and gear. Apparently kazoos are a big hit, and kids also learned how to make a kazoo from an ice tea can.

We had to walk through a tiny woodsy path full of boulders to get to Quinn’s campsite. As soon as we got there, we heard his voice.

He hugged us and showed us his little tent, and then took us on a tour. He obviously soaked it all up, as he only let two of us up at a time on the observation station, and at 12:00 when a bell started ringing, he stood still, told rob to take off his hat, and was in silent prayer reflection for all twelve bells. He said it’s for all the scouts who have died, and it’s rung every day. I looked around and everywhere boys were still with hats off. 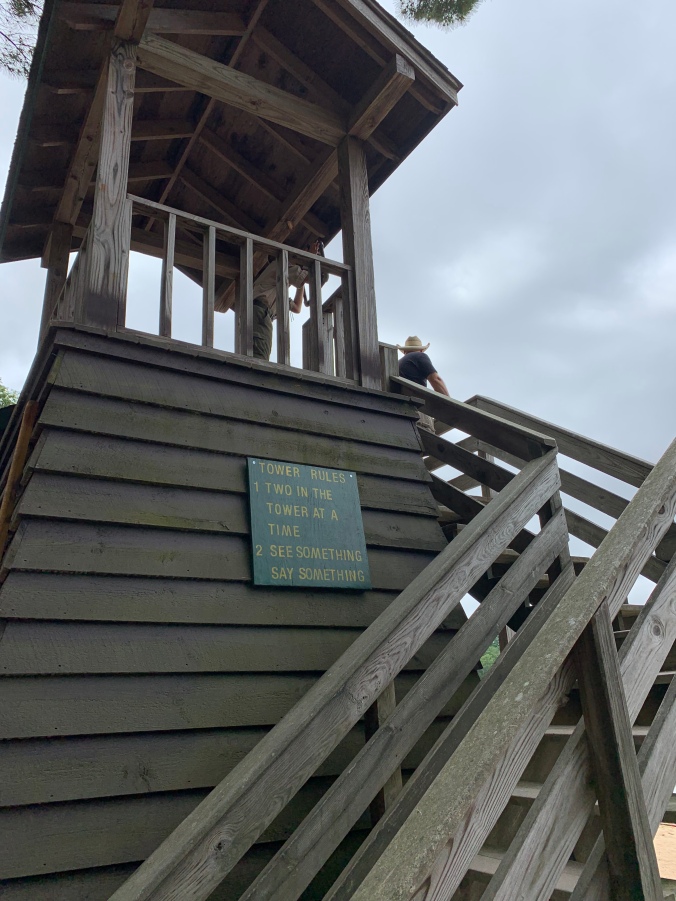 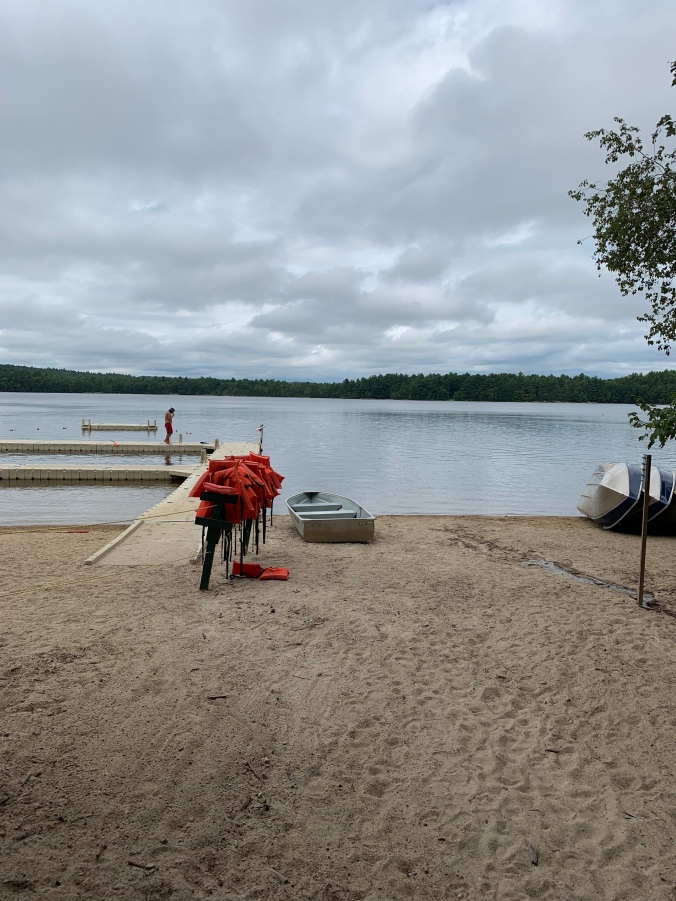 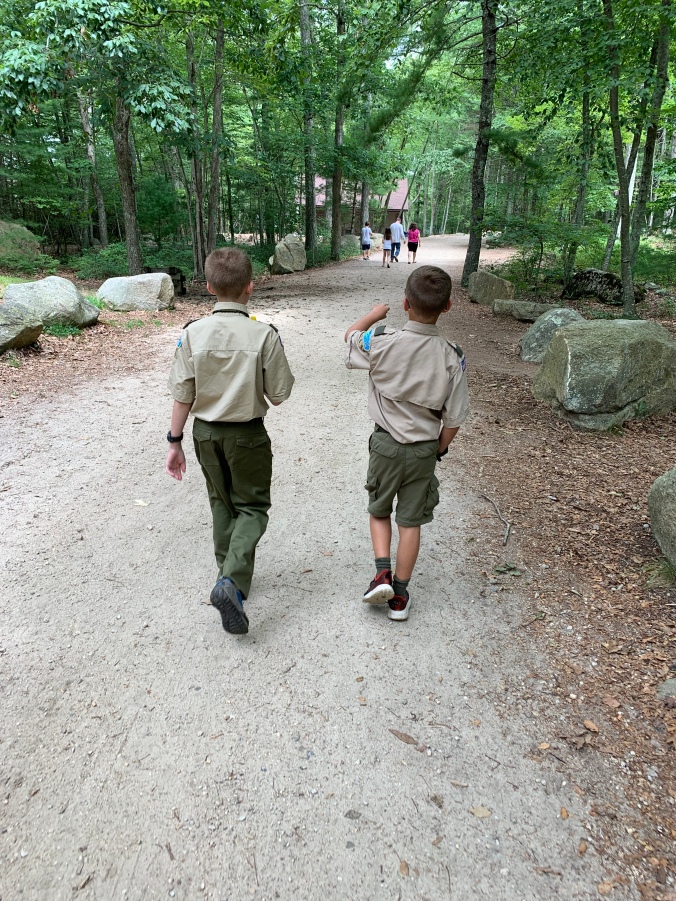 Quinn had a job yesterday to be waiter of the day for his table, so we got to see him in action. He had to get all of the utensils and set the table before the rest of the “herd” came in. A young man came flying by with his trumpet from Quinn’s troop and then we heard revelry. There is an MC and all the boys have to chant loudly to get in. The forest reverberated with their cheers. They cheered all through lunch, and it was so amazing to see these young men and their spirit. When they finished, Quinn had to take everyone’s plates and clean the table, set the benches and sweep. Another troop of boys put on a skit then danced. I have never ever seen so many young men be so free.

Walking freely through the woods, jumping from rock to rock, swimming in a lake.

Quinn and a boy from sailing even entered a regatta and won third place this past week for their troop.

We need to get kids back outside, off of technology, and go back to free roaming. The wilderness must be explored.

Then the boys from Quinn’s troop got into formation, and walked to where the brick dedication was going to be.

Let me tell you, it was the saddest yet most beautiful moment I’ve witnessed in a long time. Before Quinn joined the troop last year, they had gone on a hike. A drunk driver plowed into some of the boys. I knew two personally from my district. One little boy was killed.

He was a seventh grader, was starting aviation lessons, and loved scouting. He has an older sister and two amazing parents. Rob looked at his mom and they both hugged as they realized they went to high school together. His parents said that they saw Quinn and he reminded them of their Andrew, and i said I always thought so as well whenever i saw Andrews picture.

That is what made the ceremony so hard.

I looked at Quinn at that could have been him on that hike. The drunk driver is still awaiting trial, and some of the boys have to testify in September. They don’t have closure, and looking at the young faces of boys who are missing a part of their troop breaks my heart. His parents and sister are extremely strong, and it was an honor to be in their light yesterday.

Andrews dad actually camped all week with the troop. It was so nice to talk to him and other Scout leaders about how great Quinn did, and he actually earned six merit badges, got one that is needed for Eagle, and even will get a church patch.

Quinn took us to the church where he took his first Holy Communion. Part of me was sad I missed it, but when I saw the building…

We had to walk through a wooded path to get to an open air wooden structure with simple benches and wood carvings of Jesus and Mary and a cross. Jesus was a carpenter, and I felt His presence there. Quinn wasn’t in a suit or surrounded by family, but he was in a scout uniform and with Jesus in the woods.

That’s enough for me. 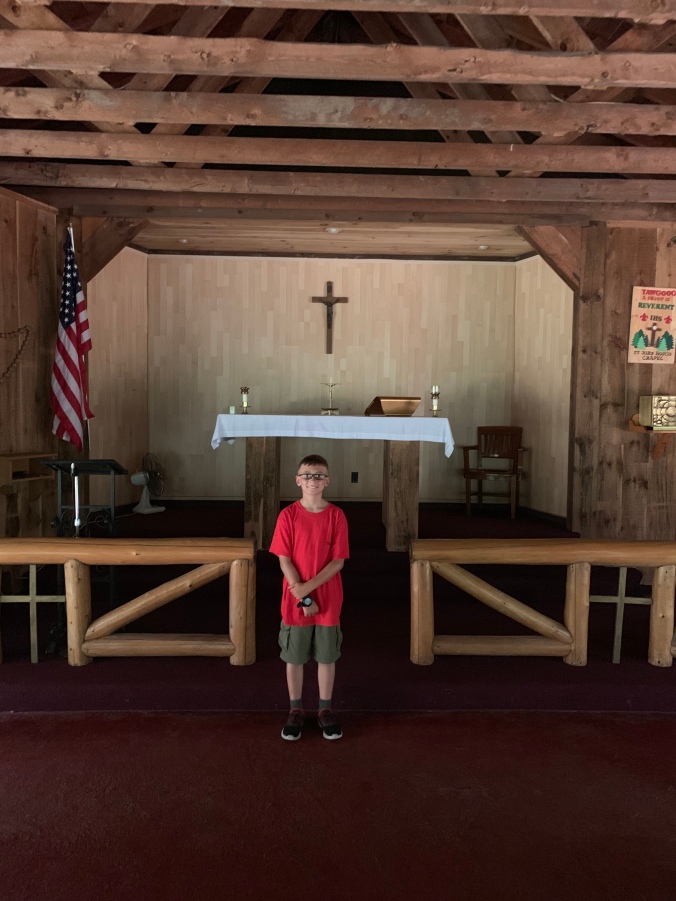 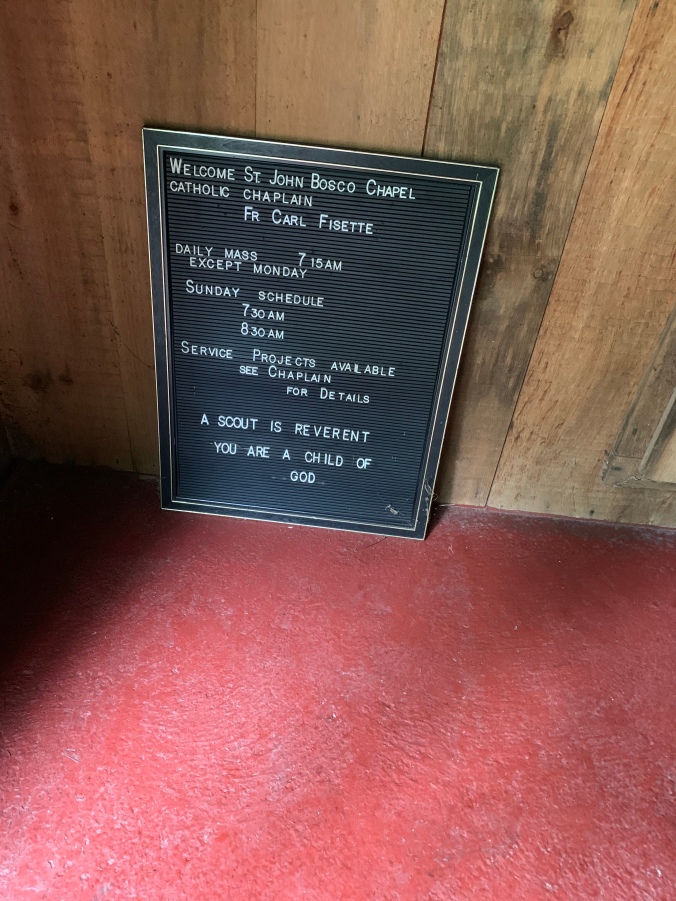 Plus, Quinn said, “I only ate the body. I didn’t drink the blood”. So I’ll get to see his first time with that in four years.

See, I stayed and prayed alone in that wooded church to Jesus to give me the long life to see Quinn grow up and watch his children become scouts. I’m praying Jesus’s plans are the same as mine.

It rained for about an hour while we were there and everyone just hung out in tents. It was nice to speak to other Scout masters and hear all of the amazing things they do all year. Madison was envious of the whole thing, and Quinn’s troop has some moms that spoke to her about an adventure troop, which is separate from the scouts but has girls and boys. I like that, as I think its good for the boys to be alone, just like Morgan’s girls scouts. The kids feel more free to be silly, but there is also this adventure group for anyone else.

We stayed for dinner, and I spoke to Andrews mom about hyperbaric chambers and acupuncture, as she works in a great sounding healing place. Oxygen hyperbaric chambers are something we’ve looked into but didn’t know a good place to start. We may have found our answer in the middle of the woods.

We ate dinner, then Quinn said it was ok for us to go. We had thought we had a long drive around, but took a chance at arrived at the ferry at 7:25. We got the 7:30 ferry on standby and had less of a drive. We got home just before 10:00. It was a day.

I also got updates from Jake about Morgan, and it looks like she is having a similar experience in Maine like Quinn did in Rhode Island. I head up to Maine early in the morning tomorrow to catch an early ferry and then spend a day or two at their cabins. Then it’s the hospital on Thursday , which is Quinn’s birthday. My parents will have the kids sleep over Wednesday night so Quinn is surrounded by love on his birthday morning when he wakes up, as i have early hospital labs and appointments.

It was a whirlwind two days, and i wouldn’t trade the experience for anything. Quinn will hopefully go to camp yawgoog for years to come, and now I know and have a visual of this sacred and wonderful place. If you have children, consider the scouts. Boy or girl. Be a leader. The moms and dads I met yesterday in Quinn’s troop are amazing and caring. They have taught these kids life skills, survival skills, and were there for them as they all mourned their friend.

There is a foundation for Andrew, the Andrew McMorris foundation. They are raising money and have special events planned. There is one this fall where they will finish the hike Andrew never got to finish. I hope there is a big turnout, and everyone can see the strength of this family, and support the scouts who have had to grow up too quickly.

May healing continue for his family.

May God bless the scouts as they travel back home today, and bless them everyday.

May my request to live a long life be granted. 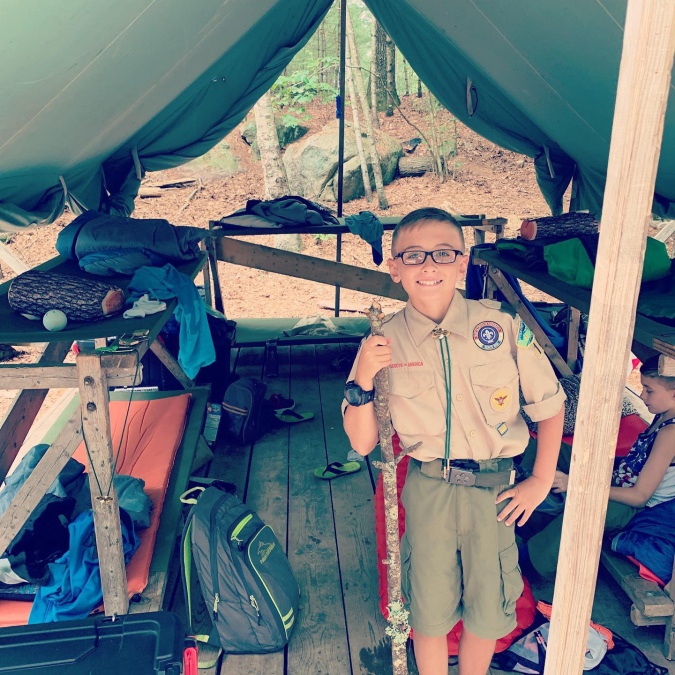 One thought on “God Bless the Scouts”