It’s a day when we celebrate the birth of our country, and when we broke free of tyranny.

It’s also the day I take my last chemo pill for cycle one of capecetibine. Then I have one week off. We’ve decided I’m going to detox hard next week. In the last three days I’ve read articles on how people are dying from this chemo because the liver is missing the DPD protein needed and it’s such a toxic drug. So that’s another test I’m going to ask be added to my hospital visit next week. The drug is called 5FU, and some cancer patients in my groups say it’s stands for either 5 f*ck you or 5 feet under.

This hasn’t been an easy week for a few reasons. Obviously not having my kids with me is hard, especially on a holiday when you watch fireworks and have family gatherings. Knowing they are at cancer support camp makes it harder. Once I saw the candle ceremony picture, I was done for the night. 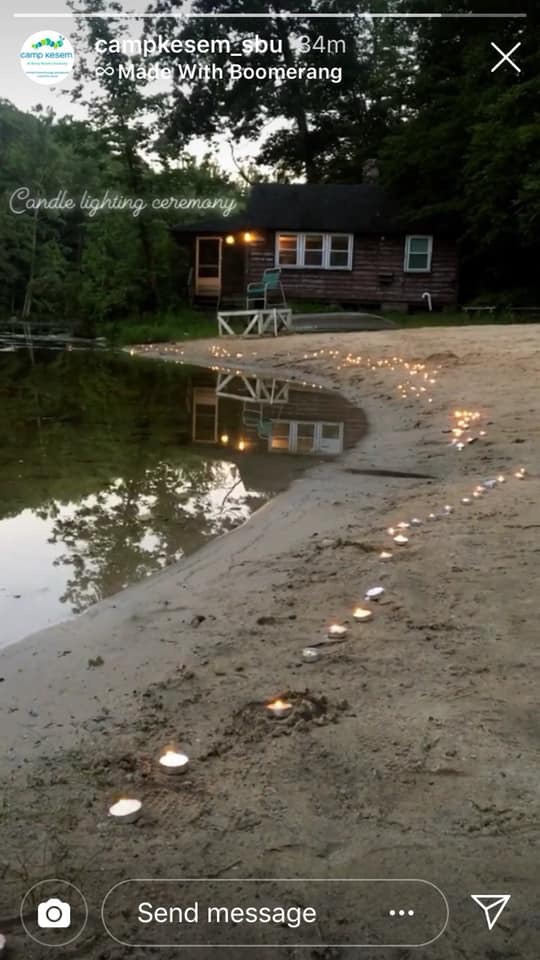 I only woke up to one picture today, Morgan in which I think she ate ice cream trying to catch a bubble on her tongue. 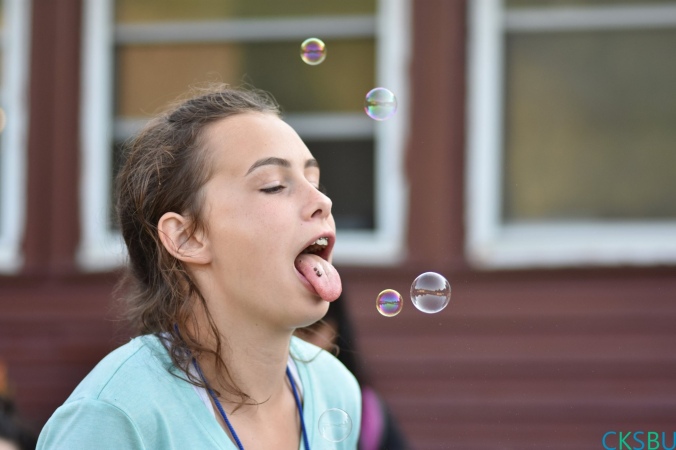 There’s none of Quinn after the ceremony, or at all, and the mind goes to the vision of him crying off to the side because he was sad after the ceremony. He had anxiety about this night, and I told him he could choose to share or not, and whatever he said was fine. I told them both that you don’t correct how the other one speaks, even if they say they are mad at me for getting cancer or that they do t like when mom is tired or snappy at times. Their stories and feelings are their own.

Then I remember my Alycia reminding me to tell my mind to stop being such a bully, so I switched to a vision of Quinn running around with his new friend “God of Thunder” and doing fortnight dances.

My best friend from high school surprised me yesterday with a visit, and I needed it. I haven’t seen her since my head shaving ceremony last summer. She brought me a rosary from Israel and a stone from the Sea of Galilee from her sister Denise, and christine just got back from Europe and brought me a blue stone from Stonehenge. I took her to see my sister and then Paula at the Giving Room.

Christine felt the energy there like I do and it was so nice to have two best friends from different times of my life in the same space.

Paula and christine splinted my thumb, as I hurt my hand and it was all bruised. We laughed as we used a straw as a splint but it worked. My phone also had somehow broke, and black started to ooze across the top of the screen.

It’s been a week.

Anything that can go wrong has been going wrong, with even new wrong things added in for fun.

This is the only place I complain and get everything out. So if I’ve been unfollowed, or if you’re not on Facebook, you truly would have no idea what rob and I and the kids are going through. And even if you’re reading this right now…

you still have no idea.

We make this look easy.

We are both still working full time, and now with me with the summer off, (but still working trying to figure out two new programs I have to teach in September), rob is working even longer hours, and then bringing the work home. We are raising three children, and in today’s society, it’s even more challenging to raise three children with no social media, and keeping Christ in their hearts. They don’t walk around talking about Jesus… they simply shine with His love.

I’m figuring out a new protocol and ordering new supplements. One month is about $1,800. Add that to $600 a month for Chinese herbs, and that equals me looking for free and cheap summer ideas for Morgan and Quinn when they come home from camp Kesem.

For anyone who knows a family or has a friend with stage four cancer, here’s some advice.

Know that it doesn’t ever get easier.

We just get better at breathing through it.

Know that all the support and outcry that comes with the diagnosis fades away, but the cancer doesn’t. I’m blessed because I have people who continue to show up and support us. I dint think anyone knows what a simple heart emoji on a status means. I try to hit the “love” button on other people’s statuses because I know what that means to me. Some say Facebook is stupid. I say get off it then. I’m staying because it helps me. Everyone else can take their judgment and go.

Not everyone has support, and not everyone knows how to be kind to people with terminal illness. You read about it all the time in support groups. Family members and friends who disappear or don’t have empathy for the ones in the arena. Same drama, same stories, but you’re changed. You are changed and trying to save your life and dealing with side effects now for extra fun. Eventually you remove yourself when you’ve had enough. Perhaps cancer gives you practice with being strong so that you finally carry it over to other parts of your life.

Some people take advantage. When this first happened, I found out that someone had a local store have a fundraiser in my name, and never told me. Months later I went to the store for the first time and the owner said, “Oh! You’re the woman I had the fundraiser for!” It was embarrassing to tell her I had not been told, and also had not received any money. (I eventually found out who had gone and done this, told the person I had found out what happened, and months later got a gas card dropped off).

You would think a terminal diagnosis would bring people closer, but in many cases it tears relationships apart and people fade away. There are people that are spoken of in the support groups called “funeral chasers”, when those who faded away show up at funerals and cry and say how devastated they are the person died, when they were never there in life when it mattered.

So to those of you in our life who continue to support my family and treat us with loving kindness, thank you. The longer we are on this road, the more we appreciate it. Someone recently said they feel the word “journey” isn’t right.

Journey sounds mystical and magical, and sometimes this path I’m on feels that way.

But pilgrimage feels more appropriate. I think of the pilgrims who suffered and showed bravery for freedom. Because of those brave people, we have America.

Home of the free, land of the brave.

I’m trying to best every day to be brave and end up free of cancer, so I guess I feel a kinship to pilgrims.

So today, as we celebrate freedom, I’ll miss my kids deeply. I’ll think of Madison with the other NJRITC cadets doing drills and PT and taking classes. I’ll think of Morgan and Quinn and pray they slept well after last night. I’ll pray they all get to see fireworks and sparklers, then I’ll take my last chemo pills and think of the pilgrims and patriots and pray for freedom of a different kind.

Freedom from cancer, and many more independence days to come.