Here’s what I think High Schools should do next year.

Kids these days idolize athletes, musicians, youtubers who do silly stunts and all make millions of dollars.

Let’s expand their world, and show them the true giants who walk among us.

Nancy Reyer was a parent of mine many years ago at Roanoke Avenue. She was a force to be reckoned with, and she, along with her sister Fran, were single mothers raising their boys and were fierce. Fierce with their love and fierce with their protection. Fast forward to Fran’s wedding, and Nancy’s son Michael was burned severely by a gel pot. In the ensuing days, Michael’s brain was deprived of oxygen and was forever changed. He spent the next eight years in bed or in a wheelchair, with his mom by his side. Some can’t handle hard things and check out. Some have others around them check out. Not Nancy. She was there for her son every single day. She held on to her faith every single day. She went national and made sure everyone knew how dangerous the gel pots were that changed her and her son’s life forever.

She buried her son this week, after eight long years. She begins a new chapter of her life, and as I hugged her and cried at his wake, her faith gave me strength. Nancy is the mother of an angel, and an angel herself.

Melanie McEvoy is a woman I met through Facebook because of cancer. We finally met in real life at the Tanger Outlet Breast Cancer walk and she had a sea of pink surrounding her as she walked. She has a constant buzz of energy whenever I hug her, and she just finished a second bout of breast cancer this year. (She can rock a head scarf like nobody’s business.) Melanie helps run the North Fork Breast Health Coalition which gives grants to women diagnosed with breast cancer to help them with day to day things. She invited me to the Pink and Pearls gala this year and I was blown away. Melanie used what sometimes makes women stay in bed and want to forget about into something that helps others. I saw her last night at a benefit that wasn’t for the breast coalition but for another amazing organization, running around and helping. Melanie made her diagnosis into a blessing for others. She is a force and an angel for women who have had their world turned upside down.

Darla Doorhy works at my dentist’s office as the receptionist. If you talk about a big heart, her face will appear in your mind. She makes me laugh every time I go to the dentist, and for a girl who has dentist phobia, her smile is the first thing I see. Darla has two stunning daughters. I mean… stun…ning. Her oldest Kait was the Mattituck Strawberry Festival Queen when she was in high school, then she went off to college. While in college, she was hit by a car and passed away. The community was devastated.

What did Darla do? She turned her grief into something good. “Kait’s Angels” was formed. This organization raises funds to help the community. They’ve donated buddy benches to elementary schools. They’ve brought in a phenomenal speaker for high school students. They help families in crisis. One month after my stage four diagnosis, several cars pulled up to my house with a bunch of men and Santa Claus. They delivered dinner, wrapped gifts and gift cards, as I sobbed and hugged them. Every year they have different fundraiser so they have the funds to make things a little better for those who need it. Last night was their big event, Wingo. It was huge. There were about a hundred and fifty Chinese auction baskets, lottery trees, special events with Maryann the Medium, fifty fifty raffle, bingo, and very fancy pocketbooks. Kait’s family was there, her sorority sisters, and Darla ran the show.

I had a really hard night the night before, didn’t sleep, and cried most of the day. When I was talking to Paula and my mom, they both said of course I was crying all day. The past three weeks have been weeks that would normally bring people to their knees. I had a bad Petscan, confusion over which chemo to take, started a new toxic chemo with nightmare side effects, had to finish report cards, pack up a classroom again after having to unpack/pack/unpack/pack in the beginning of the year due to mold, say goodbye to children who I have loved every day that they walked into my room, say goodbye to a principal who helped me believe in myself again, get “trained” in two new programs which will take an enormous amount of work in kindergarten next year, sent an email asking for a new drug that may work synergistically with my chemo but has some pretty nasty side effects all on it’s own, got my feelings hurt again and prayed to toughen up while staying with a soft heart, and am sending my kids away to different camps tomorrow, one of which is for children who have parents with cancer… and I hate that my kids qualify for that.

So of course I had a day.

The last thing I felt like doing was going to an event in a tent where women looked beautiful and drank wine and laughed. I had gotten two tickets a while ago for me and Morgan because she never gets special girly treats like manicures or concerts. Money is tight and if I’m going to spend it on extras, spending it for a charity felt better. She has also lost more hair in the back, and I wanted a special night with her.

One of the first persons I saw was Darla. She was a vision in pink, her daughter Kait’s favorite color. It’s no secret I have come to hate pink because of the hijacking by companies during October for breast cancer awareness, when everywhere I go I see pink, and money isn’t going to research to save lives, but to corporations that tell people to save the “Tatas”. Screw the tatas, save my life instead please.

But last night, I saw pink everywhere, and I felt my heart change. Last night Pink was for Kait, and a celebration of her spirit. I’ll bring back out my pink clothes again and wear them not for breast cancer, but for Kait.

Morgan and I sat with a friend of hers and her mom whom I’ve known for years and is my friend too. They came with two other mom friends and we grabbed a table. Four other friends of mine showed up and ended up sitting with us. We laughed and cheered as people won bingo and baskets, and Morgan and I each one a basket. It was a great night, and I am so glad I stopped crying and decided to go, for two reasons especially. 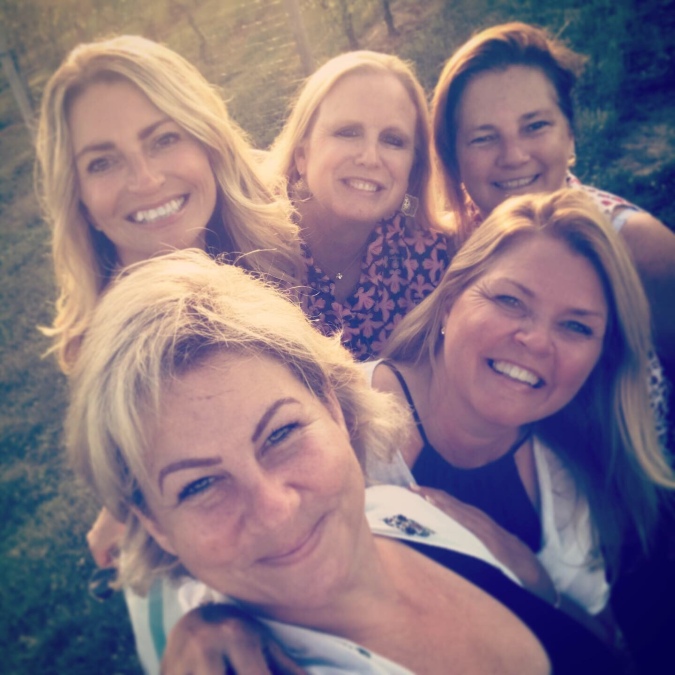 I wanted to show Morgan how I could still have fun and not drink alcohol. I brought a delicious organic fruit sangria Paula has sent and added some sparkling water and felt fancy among the vineyards. As we drove home, I spoke with Morgan about how I used to drink, and realized I had just as much fun that night as I would have in the past.

I also wanted her to see how life goes on. She kept looking at Kait’s picture and Darla and her other daughter. They are all beautiful, inside and out. She saw strong women putting one foot in front of the other with dignity, grace, and beauty, while dedicating their lives to make others lives better, even after tragedy. 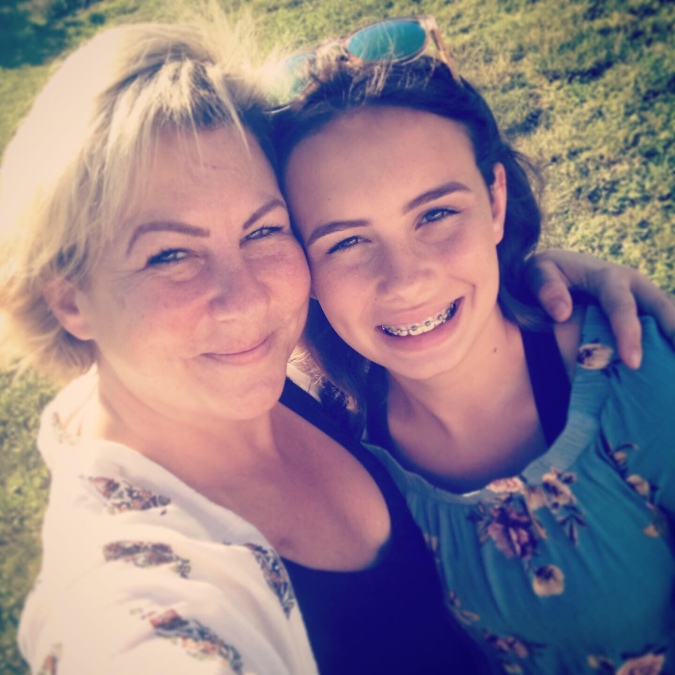 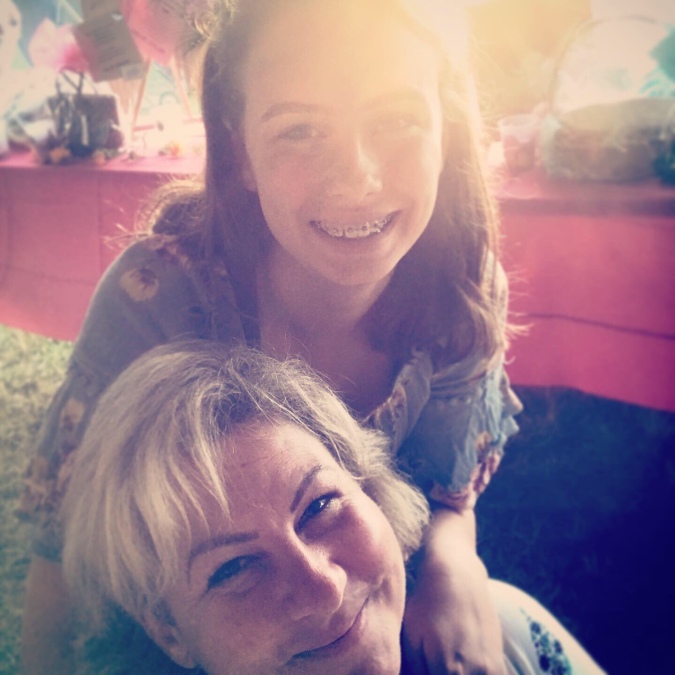 She met Melanie McEvoy, and was so happy she won the grand prize. We took a selfie at the end of the night, and I told Morgan she just met two of the strongest women I know.

Women like Nancy Reyer, Melanie McEvoy and Darla Doorhy are who high schools should bring in every year to talk to the students.

These women make the world better every single day by their actions and examples.

I’m going to spend the day breathing and making sure the kids are all packed for all of their camps, then I have to pack and make sure I have all the meds and pills and potions I need for the trips to drop them off. It will be a day, but…

Today, may we all be like Nancy, Melanie and Darla. May we all make the world a little brighter, walk with grace and beauty shining from our hearts, and we can even wear pink while doing so. 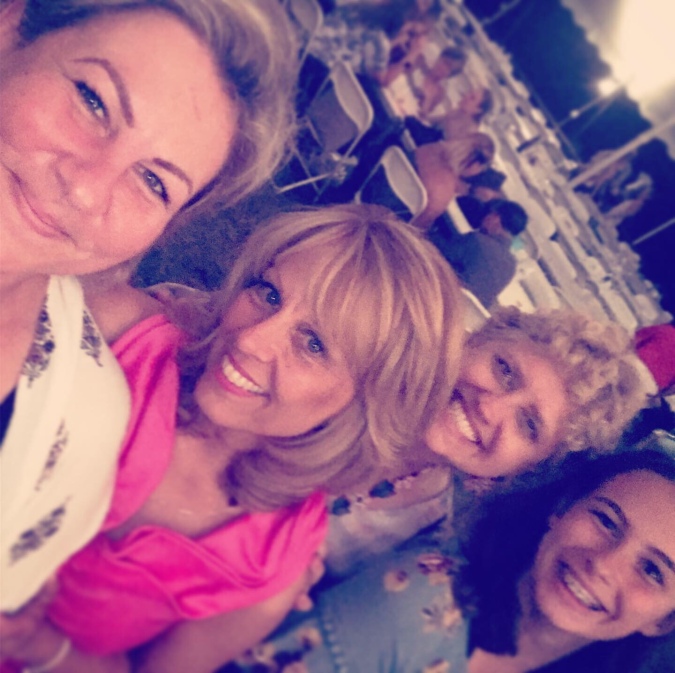 One thought on “Kait’s Angels Among Us”