It feels like only yesterday it was Thanksgiving and we were scrambling to get paperwork together to go to Boston. That trip sucked all of my hope out for weeks. In a way it’s a good thing it was the Christmas season so I was surrounded by the story of love.

Yesterday my kids had the Christmas pageant at church and we even had a real baby Jesus. I have always loved the story of his birth, and hoped seeing the pageant would help me get the spirit. I loved seeing my kids in it, but it didn’t.

Maddie was invited to a friends house, and Morgan and quinn went to another. That gave rob and I enough time to wrap their gifts. There’s not a lot. But they’ll be happy.

They’ve still got me, and two years ago we thought it was my last Christmas. I’ll slap a bow on me tomorrow morning with a forty year warranty.

Morgan never had a birthday party with friends, and with this upcoming week being busy with MRI and injections and such, I told her she could invite a few friends over for a sleepover. So I found myself last night making chocolate chip cookies, Oreo truffles, fudge, and peanut butter kids drop cookies. I finally cleaned up the kitchen and got the girls all tucked in and lights out at 10:30. 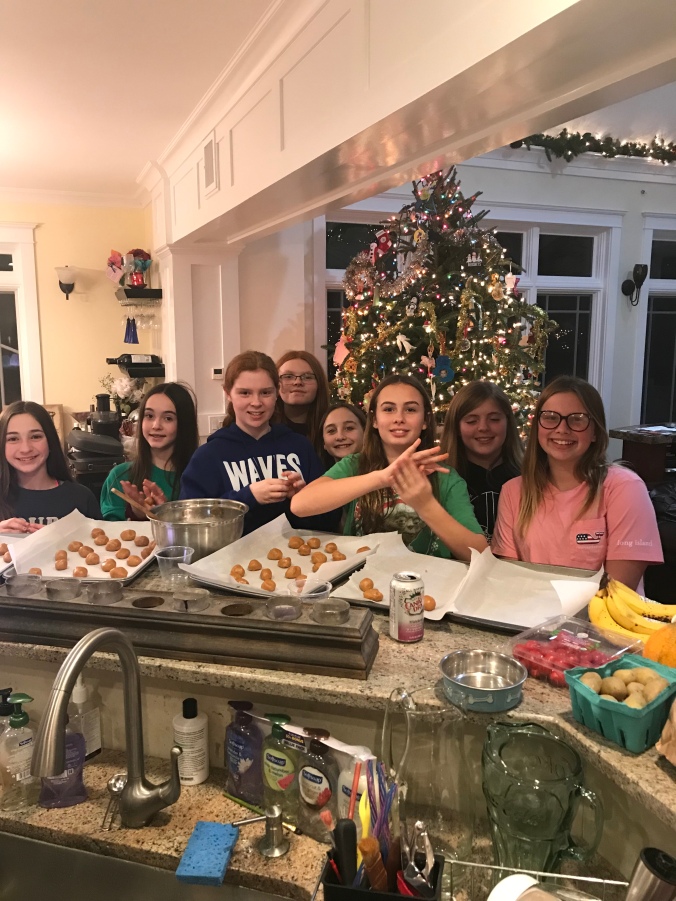 The tamoxifen has me up, heart racing and sweating.

Today I’ll get the girls bagels, then do last minute running around. Robs parents said they will stop by for a quick Christmas Eve dinner so I’m getting what I need.

I think we may go to robs church tonight. I’m hoping hearing the Christmas story on Christmas Eve will bring me the spirit.

I find myself drawn more and more to Mary. I bet she didn’t feel the Christmas spirit either on that first Christmas Eve. She was a teenager who just traveled with her husband, a Virgin pregnant with a baby who she was told would be the Savior.

The King of Kings.

But this king didn’t come with all you would think. No servants to fetch her water or rub her feet or swollen ankles. No caravan to bring her to Bethlehem. Not even a room with a view when it was time to deliver.

She labored, pushed, and probably missed her mom. All she had was her husband, and even he wanted to leave her at first until the angel came to him as well.

Mary didn’t have it easy.

Sure, she lived to see Jesus perform miracles. Raising the dead, restoring sight, healing all sorts of afflictions.

That’s my son! I’m so proud.” I wonder how often she thought that.

We know eventually what happened to that baby, and how his mother had to watch him years after that night in the stable come to be tortured, crucified and die on the cross.

Watching your child die is a pain no one should ever suffer.

Yes, she saw him rise from the dead, but pain, sorrow and grief must have washed over her like a tidal wave for those three days.

The trials of Mary were great.

Her faith was greater.

Rob and I stopped in an antique shop yesterday. I saw an old cracked, dirty religious statue of Mary, holding an orb, which the man said was the Earth.

It was from the early 1900’s, and the moment I saw it I cried. Rob bought it for me as my Christmas gift. I held it like a baby and was filled with love. There were a bunch of elephant statues all over the store, and the man looked at me and gave me a golden elephant. I cried again, and told him how elephants have a P53 mutations and don’t get cancer.

The treasures you find in other peoples trash.

Maybe tonight as rob and I take our children to the church we were married in will be when I get the Christmas spirit. But perhaps I’ve missed the real reason why this time doesn’t feel different.

Maybe it’s because I’ve had the spirit all along.

Just like Dorothy from the wizard of Oz, when Glinda tells her she always had the power to click her heels three times and say “There’s no place like home.”

Perhaps it doesn’t feel different because some people need the season to remember the reason, and I’ve got the reason in my heart every day, no matter the season.

Today may everyone take a moment to read the Christmas story. Take out your bible or google it. Read it to your kids. Not a Santa story of how Santa comes down the chimney, but the story of Jesus, and how love came down from heaven at Christmas. How a teenage girl believed, and her husband soon followed, and together they welcome love into a stable, surrounded by animals. How the heavens opened up and angels sang, and shepherds saw them. How three wise men came bearing gifts and worshiped a little babe.

And how that one birthday is still celebrated all over the world. In a time when there were no cameras, no internet, no GPS, no Alexa or Siri, no social media… a birth of a baby in a stable went viral.

“No anguish I have had to bear on your account has been too heavy a price to pay for the new life into which I have entered in loving you.”

― George Eliot, The Mill on the Floss

“Your pain is the breaking of the shell that encloses your understanding.”- Khalil Gibrand from The Prophet

Frees us of all the weight and pain of life:

That word is love.”

1] And it came to pass in those days, that there went out a decree from Caesar Augustus, that all the world should be taxed.

[2] (And this taxing was first made when Cyrenius was governor of Syria.)

[3] And all went to be taxed, every one into his own city.

[4] And Joseph also went up from Galilee, out of the city of Nazareth, into Judaea, unto the city of David, which is called Bethlehem; (because he was of the house and lineage of David:)

[5] To be taxed with Mary his espoused wife, being great with child.

[6] And so it was, that, while they were there, the days were accomplished that she should be delivered.

[7] And she brought forth her firstborn son, and wrapped him in swaddling clothes, and laid him in a manger; because there was no room for them in the inn.

[8] And there were in the same country shepherds abiding in the field, keeping watch over their flock by night.

[9] And, lo, the angel of the Lord came upon them, and the glory of the Lord shone round about them: and they were sore afraid.

[10] And the angel said unto them, Fear not: for, behold, I bring you good tidings of great joy, which shall be to all people.

[11] For unto you is born this day in the city of David a Saviour, which is Christ the Lord.

[12] And this shall be a sign unto you; Ye shall find the babe wrapped in swaddling clothes, lying in a manger.

[13] And suddenly there was with the angel a multitude of the heavenly host praising God, and saying,

[14] Glory to God in the highest, and on earth peace, good will toward men.

[15] And it came to pass, as the angels were gone away from them into heaven, the shepherds said one to another, Let us now go even unto Bethlehem, and see this thing which is come to pass, which the Lord hath made known unto us.

[16] And they came with haste, and found Mary, and Joseph, and the babe lying in a manger.

[17] And when they had seen it, they made known abroad the saying which was told them concerning this child.

[18] And all they that heard it wondered at those things which were told them by the shepherds.

[19] But Mary kept all these things, and pondered them in her heart.

[20] And the shepherds returned, glorifying and praising God for all the things that they had heard and seen, as it was told unto them.